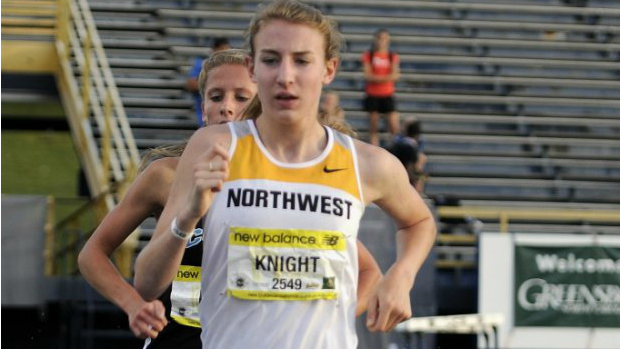 The depth and talent that's shown up in 2013 at the U.S. high school level is making this outdoor track and field season one to remember. Few athletes have had the type of spring Niwot High School (CO) junior Elise Cranny has had, running a US#2 1,500m time of 4:15.07 at the Payton Jordan Invitational in April, which ranks her as the third best prep ever over the distance.
The Portland Track Festival is pleased to announce the addition of Cranny to the women's 1,500m field, contested under the lights at Lewis and Clark College on June 8. Cranny, who also ranks US#6 over 800m, will test her talent against some of the best professional middle distance talent in the country, as she looks to set another big personal best.
"It's hard to imagine that Elise Cranny was a 5:02 miler last spring. Now, just a year later, she has run the third fastest high school 1,500m of all time and we're excited to watch her join our elite field and take aim at the national record," says Portland Track Festival Director Craig Rice.
In addition to Cranny, a trio of prep talent from Washington State will be competing in the women's events. Camas High School sophomore Alexa Efraimson, who currently ranks US#3 over 1,500m with her 4:19.54 best, will compete in the women's 1,500m, looking to push the 4:15 barrier.
Future University of Washington teammates Katie Knight (Sr., North Central) and Amy-Eloise Neale (Sr., Glacier Peak) will contest separate events, with Knight entered in the women's 5,000m, while Neale looks to qualify for the Great Britain Junior National Team in either the 1,500m or 3,000m steeplechase.
"Amy-Eloise Neale and Katie Knight have been the face of Washington state's distance dynasty since they were freshman. The PTF will be their last high school race together, but we'll also be seeing the ascendance of their successor, Alexa Efraimson, who will carry the Washington state tradition into the future," Rice states.
The sixth annual Portland Track Festival is set to take place on Friday, June 7 and Saturday, June 8 at Lewis and Clark College in Portland, Oregon. The distance-only event hosts a collection of races, giving America's best distance runners the opportunity to run fast and compete towards the U.S. Outdoor Track and Field Championships.
For more information on the Portland Track Festival, please visit: www.portlandtrackfestival.com.
Tweets by