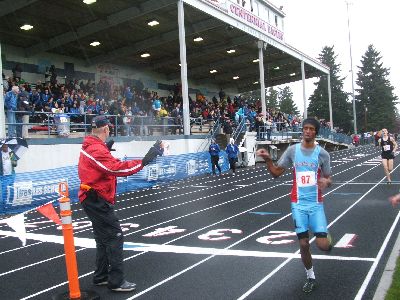 Day Two of the Mount Hood District brought the return of cold & very wet weather but it did not dilute the competitive spirit of the athletes.   With every event being a final on Wednesday there was much to take in by the fans, who braved the elements.    Although the weather was a far cry from what greeted the athletes the previous day, there was at least one constant:    record breaking by Haley Crouser.   The Gresham sophomore, who established a new record in the javelin on Tuesday, set a new meet record in the 100 Meter Hurdles with her time of 14.91 topping the longtime record of 15.04 set by Kamaia Kohlmeier of Parkrose in 1987.   Courtney Atteberry of Centennial & Katie Dyk of David Douglas placed second & third with Atteberry ’s time of 15.89 earning a  trip to the State meet.

While the weather may have taken a turn for the worse, there were also some pleasant turns towards the positive and there was no better example of that than with Erin Urbanowicz of Gresham.   On Tuesday she was in tears after realizing, that she had placed third in the Shot Put, and missed out on a berth in the State meet by just .25M - and every former competitor, who witnessed the event Tuesday, had to feel empathy for her.   Wednesday, however, was far different and Erin not only earned a trip to Eugene but she won the Discus with a heave of 120-07.   Track sometimes can seem rather punishing to the ego but on a day like this it can be so amazingly rewarding as well.  Placing second and earning a trip to State in the event was Caitlin Curtis of David Douglas, who threw 114-05, and her team mate Sophia Stuart went 112-05 for third.

For Ryan Crouser, who remains hampered by a groin injury, it was another day to try to maintain his health, yet qualify for State.   As in the discus the previous day, Ryan did not utilize the spin but launched the shot from a standing position.   His first throw went 55-06.5 and was good for the lead.   He cautiously watched the competition, passing on further attempts, to earn the victory & will head to State with nine days of rest in hopes of returning to fuller muscle health.   Jon Treloggen of Gresham saved his best for last and will join his Barlow rival after a toss of 53-05.25.    Alex Balducci of Central Catholic was third with 52-03.0 and Denzel Kankam of Centennial took fourth and was over the 50M barrier (51-03.0).

Arthur Delaney of Barlow was the male star of the day recording victories in the 100 Meter Dash (10.80) & the 400 Meter Run (51.06).    His spring has been limited due to hamstring issues yet on Wednesday he really got rolling late in the 200 Meter Dash and recorded a new meet record in the event with a time of 22.15.   Delaney was pursued in both the 100 & 200 by Devauntae Hoffman of Gresham & Edmond Colford of Centennial.

The Triple Jump was a hotly contested event but the aptly named Hayward Denison won the event with a mark of 43-05.00 and will compete next week at the home of the University of Oregon.   Conner Skiles of Reynolds took second with 43-04.0 edging Lukas Michener of Barlow, who went 43-00.5.   Dillon Hoeckner of Gresham placed third.     Skiles returned in the High Jump (6-03.00) narrowly missing first again but earned a trip to State behind winner Dillon Hoeckner of Gresham.  Central Catholic’s Brendan Hurley ended up third with 6-00.0 edging Mark Schearer of Barlow, who also went 6-00.   Ivan Palavra of Centennial ran 15.57 to edge his team mate Zach Feldman, who ran 16.12.  The 300 Meter Hurdles title went to Beau Duronslet of Central Catholic, who ran 41.22.  Hunter Pattock of Gresham nipped CC’s Lawrence Wilson at the line to claim a berth at State by two-hundredths of a second with his time of 41.63.

The middle distances proved to be the homeland of Badane Sultessa of Centennial, who used his formidable kick to his advantage.   In the 1500, which was run earlier in the day, Sultessa was challenged by Andy Bennison of Central Catholic, who pushed the pace.  Bennison went through the 400M in a high 61 seconds & was shadowed by Sultessa.   A second lap of 64 (2:06) essentially made it a two man race but Sultessa remained just off the CC star’s shoulder.   Badane was well aware that Bennison had won the 3K the previous night & knew he must be at least a bit tired and he began to push the pace during the last lap.   Although Bennison may have been a bit tired he did not concede the race & made his own surge to briefly edge in front.  Still in the end Sultessa pulled away as he swept through the turn & headed into the stretch and won with a time of 3:59.21.   Andy placed second to earn his second berth in the State meet in 4:01, while Jack Haselnus of Barlow earned third.  Josh Campbell, also from Barlow, finished fourth (4:11) & was followed across the line by freshman Kyle Thompson of Central Catholic.

The 800 would have a new supporting cast for Sultessa but the story would be the same, as the end result would come down to a kick.  The pace was a bit slower than anticipated but Sultessa remained in control throughout the race.   Badane was challenged by Kirk Gulliver of Central Catholic & Jordan Hofeld of Barlow down the backstretch.   Sultessa always seemed well within himself and crossed the finish line in a time of 1:58.25, yet was less than winded.   Gulliver & Hofeld were all out and giving everything they had to earn the last berth to State.    Kirk dove at the line and fell to the ground but his effort was rewarded by a trip to Eugene & a time of 1:59.35.   Jordan Hofeld was credited with a time of 1:59.39 and he was not only third but had barely missed an automatic qualifier by less than half a second.   It was a rather harsh reality after a great effort, which was evidenced by the fact that three runners lay sprawled on the ground after the race (Faustino Melton-Holdman from Reynolds ran 2:03 for 4th & also had given his all).

Paige Rice is a freshman running for St. Mary’s Academy and she, along with senior team mate Erin Bergmann, put her stamp on the middle distance events this week.    In the early laps of the 1500 Rice set the pace and was followed by Bergmann & Andrea Dettman of Centennial, who had won the 3K the previous evening.     With two laps down Paige moved into a lead she would never relinquish while Erin & Andrea were left to wage their own duel for second.    In their wake followed a struggle for fourth between Rachel Shelley of David Douglas, Christa Coleman of Barlow, Kennedy Martin of Gresham & Kirra Morally of Centennial.    Rice won the event with a time of 4:51.36, while Bergmann opened up a gap on Dettman, to garner second in a time of 4:53 and earn a berth at State.     Andrea Dettman finished alone in third and was the only other runner to break five minutes (4:58), while her team mate, freshman Morally, made a surge in the final lap and a half to claim fourth in 5:04, as Shelley, Coleman & Martin followed  her in order with times of 5:06, ’07 & ’09.

The 800 Meter would pretty much follow the same pattern except that the SMA duo was followed by Central Catholic runners Maggie Riley & Mikayla Molinari.   Rice put in a mid-race surge, which opened a gap over Bergmann, who in turn drew away from Riley and Molinari.  In the end Rice earned her second victory of the day in 2:18.38, while Bergmann claimed her second trip to State with a second place time of 2:20.   Riley (2:24) & Molinari (2:25) placed third & fourth respectively & Netanya Beard of St. Mary’s (2:26) finished fifth.      For Erin the day was not quite over, because she would run the third leg of the victorious four by 400M Relay, which ran 3:58.2 and defeated Central Catholic by ten seconds.   Julia Reed led off the relay, while Emma Peel & Carly Januzzi ran the last two legs for St. Mary’s.

St. Mary’s Academy and Central Catholic went 1 – 2 in the 4 by 100 Meter Relay, so both teams will head down to State to continue their rivalry.   The teams were timed in 49.48 & 50.50 respectively.   Barlow captured the overall Team victory for both the boys & girls with 160.5 & 145 points respectively.   Central Catholic with 134 points  placed second among the boys’ totals with Gresham (114) & Centennial (112) taking the next two spots.   St Mary’s Academy finished second among the girls’ teams with 117 as they edged Gresham by two points and Centennial by five.

Good luck and good health to all the athletes, who have earned a trip to the State meet.   Hopefully they and track fans will finally see a few days of good weather in a row.