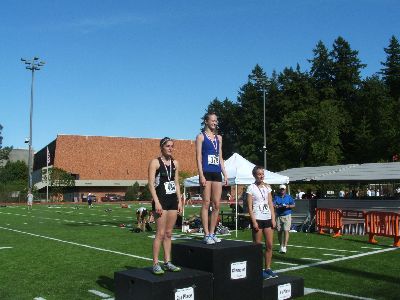 With sunny skies and a temperature about 84 degrees the Northwest finally had very fine running weather.   A number of Washington runners joked that they had to leave the state to find it but many for sure took at advantage of the situation.     This is the fourth year of the event held at Lewis & Clark College in Portland and the event has morphed from a simple challenge between the two states looking across the Columbia River to an event that also welcomes runners willing to travel from Idaho & Montana.

Annelise Coxeff of Centennial had a banner day with victories in the 400 Meter Run, where her time of 59.03 topped Amber Reiber of Selah (59.65), plus in the 300 Hurdles.  Taylor Plunkett of Gladstone & Alivia Wachsmuth of Liberty-Christian also broke a minute.   In the hurdles she ran 45.65 to defeat Hannah Tarleton of Sehome, who ran 45.82.    Sabrina Moore of Southridge and Georgia Henderson of  Sunset traded positions in the 100M & 200M with Moore claiming the shorter race with 12.21 and Henderson taking the longer  sprint with a 24.89 clocking.   Henderson’s time of 25.07 was also under the former record of Melissa Baller of Glencoe.

The athletes of Summit High School in Bend were out in force in support of the meet and many gave a good account of themselves.    Kira Kelly of the Storm battled Hayley Gregoire of Beaverton early in the 3K before pulling away to a title in a time of 10:35.54.  Gregoire finished alone in second with 10:55 and Rachel Cundy of Lakewood placed third in 11:04.   The 800M offered an interesting race, as Megan Fristoe, current 5A XC champion and normally a longer distance runner, challenged Paige Kouba of South Eugene.  Win or lose Paige is always willing to challenge for the lead and  the duo raced virtually the entire way with Kouba coming out on top as she edged Fristoe 2:14.97 to 2:15.06.  Erin Clark, who won the State title in the 6A 3,000 Meters finished third in a fine time of 2:18.34.  Charlie Davidson of Scappoose & Hannah Jossi of Portland Christian earned 4th & 5th with 2:19 & change, while McKaelie Wolfe of Newberg ran 2:20 to earn sixth ahead of Summit’s Ashley Maton, who was close behind.   Priscilla Timmons of Skyview doubled back in the 1500 Meters and led early but Beaverton’s Ally Aschenbaker came on late to triumph with a 4:48.26 clocking, while Timmons finished a second back.   Sierra Brown of Hidden Valley placed third in 4:53 just ahead of pack of runners, who inundated the finish line with versions of 4:45.   Credited with the time were Audrey Western of University, Lauryn Wate of White River & Aiyanna Cameron-Lewis of Crescent Valley. Nicole Anderson of Morton – White Pass was timed in 4:55, which was good for seventh & Cheryn Trapp of Vallivue (Idaho) ran 4:56.   Trapp also finished 12th in the 800M.   Sarah Fristoe of Summit earned 9th and Sofia Kane of Olympia rounded out the top ten.

Going into the race the boy’s 800 Meter run looked on paper to be very promising and it surely did not disappoint.   Stetson Smith of North Medford, the 6A champion in the event, went out hard with a 54 second first lap but he was still closely  pursued by a trio of quality runners.   Centennial’s Badane Sultessa moved early with about 300 meters to go to take over the lead but Marcus Dickson of White River & Austin Collins of Colton accelerated off the final turn and battled down the stretch.  In the end it was almost too close to call but Dickson prevailed with a new record of 1:52.  Collins (1:52.68) and Sultessa (1:53.4) were both under the old record of Tim Pettit (1:53.44), while Stetson Smith earned fourth with 1:54.95.  Izaic Yorks of Lakes (1:55.0) & Zach Boyd-Helm of West Linn finished 1:56.44.  Nicholas Schippers of Kingston won the earlier heat with 1:58.

The 1500 Meters saw Izaic Yorks of Lakes pull away during the final lap to win convincingly with a time of 4:00.10.   Nicholas Schippers of Kingston edged the trio of runners coming in with 4:02, which also included Joe McFadden of Timberline & Dallas Snider (a sophomore) of W F West.   Lucas Graham of NW Christian placed fourth with 4:05.   A battle between sophomore runners then followed, which saw Travis Neuman of Summit triumph with  4:07.7 over Travis Hensley of  Charles Wright (4:09.28) & Eric Aldritt, also from Summit, who ran 4:09.36.  Mitchell Butler, a freshman from Siuslaw, garnered 12th in 4:13.

With the temperature at 84 degrees that afternoon three Oregon runners decided it might be wise to share the pacing duties, so Andy Bennison of Central Catholic (6A – 1500 Meter champion), Ina Burgess of Franklin (5A – 1500M & 3K champion) plus sophomore Dan Oekerman of Beaverton took turns in leading the way in the 3K.   Bennison led the way through the first lap in 67 and came through the 800M with Burgess on his shoulder with 2:22.   The ensuing laps went in either 70 or 71 seconds in a very methodical way and it was only in the later stages that the race devolved into any ‘every man for himself’ format.   Bennison drew away at that point to end his campaign on a winning note with a time of 8:50.77.   Ian Burgess fell back to third briefly then recovered to easily take second in 8:55.59   Jeffrey Ott, a junior from Ellensburg, surged late to pass Oekerman for third with his time of 8:57 topping the Beaverton soph’s 9:58.  Akiharu Kitagawa of Wilson earned fifth with 9:02, while Jackson Haselnus   of Barlow & David Orth of Beaverton secured the next two places.

The pole vault had some issues, yet it boasted a quality field.  J J Juilfs of Sheldon led the field with a solid 16-02 to top Brendan Hooper of South Medford, who cleared 15-02.  Matt Hidalgo of Banks led a seeming horde of vaulters, who cleared 14-08 & the quality of the field can most quickly viewed by noting Zach Crambitt of Thurston cleared 14-02, yet was  seventh.  Casey Burns leaped 47-00.25 in the Triple Jump while Devin Burnett of Liberty-Issaquah went 44-10.0 for second.  Terrrel Boyes of South Bend won the Long Jump with 22-04.75 to top Arthur Delaney of Barlow’s 22.00.75.