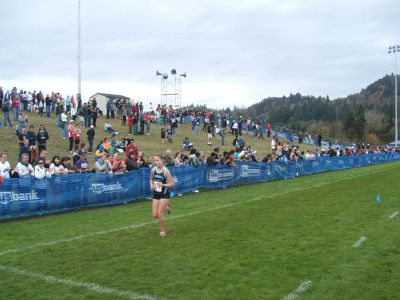 Bob Dylan long ago sang and stated   “The Times They Are A Changin” and in the Oregon 6A girls’ division it might actually come to pass in 2011.   If ever there was a year, when the Jesuit juggernaut could be beaten, this would appear to be the year.   The Jesuit ladies have claimed the state championship nine years in a row.  You have to go back all the way to 2001, when Erin Gray and Sarah Pearson led South Eugene to a title, to see another team top the list.    Most of the time, especially since Oregon went trophy crazy and expanded to a ridiculous four divisions, depending upon how one counts it is six, the contest has not even been close.   The leaders and support change may have changed but the results have been pretty much the same.

The key to this occurrence is the graduation of three-time State Champion Annamarie Maag.   Her departure alone opens up the individual competition and the additional departure of Payton Schutte, who finished third individually last fall & second in 2009, removes a sizable advantage that the Crusaders have had in recent past.   Annamarie & Payton were not the only losses but lest one feels too great a vulnerability it is good to remember that Jesuit has had a junior varsity in the past few seasons, which has been superior to most team’s varsity.   Adrienne Demaree, who placed 21st at State last fall, and Olivia Artaiz, who earned 23rd,, should be the leaders of a solid team.   Adrienne had a solid spring & will probably step it up further as the team leader.

If the Crusaders can be pried from their usual perch the most likely suspects would appear to be South Eugene, Tualatin and St. Mary’s Academy, who possess a solid 1 – 2 punch at the top of their pack plus Crater, who had a very solid  JV last fall.   The Axemen will be led by Erin Clark, who placed eighth last fall and then won a State title in track in the spring, and Paige Kouba, who finished 17th.   SMA will counter with Paige Rice, who garnered second at State plus Ellen Patterson (15th).   Tualatin can counter with Kristin Coffman, who came in sixth, and Alexandra Cross (12th).    Crater, like the other potential champions, has a number of replacements, who need to step forward but they return Sarah Hastings (18th).   Sarah will need to fill the void left by Jessica Vig.  If South Salem’s Emily Weber can remain healthy, the Saxons can be a threat as they also have Vivian Hawkinson returning and a number of other young runners.

Individually Paige Rice, who earned second at State last fall on paper would appear to be the one to beat.   Paige has loads of experience beyond what one would expect of a sophomore, which makes her even more formidable.   Still in my mind Erin Clark is a runner to watch closely.  She made rapid improvement late in the cross country season and appeared to have a somewhat off-day at state.   Still she showed her ability in track and this fall she could truly come into her own.   Kelly O’Neill of Lakeridge is another, who had a bit of an off-day at State last fall, yet she still placed tenth after taking fifth as a freshman.   She also was impressive during the spring and can be expected to be in the mix.   Piper Donaghue of Grant finished ninth last fall and also had a solid spring.   Of course with girls freshman runners can have an immediate impact and Gracie Todd of Sheldon offers much promise.   If she can carry her ability in the mile a longer distance Gracie could make matters interesting.

The best team in the state very likely will be the Summit Storm, who have been victorious the last three years in the 5A division.   The girls from Bend, Oregon are loaded and they will be led by two-time defending State champion Megan Fristoe, who ran 18:37 last year.   She will be backed by Ashley Maton, who is a State champion in track & placed tenth in XC, and by Sara Fristoe.  Sara has not only run at a high caliber but she has been stunningly dependable placing 13th, 14th & 13th in her first three campaigns.   Right behind Sara literally has been Kira Kelly, who was 14th last year.   Brit Oliphant lost some time last fall due to health issues, yet she still finished 19th at State.    That is a very solid top five, which makes Summit the team to beat in all divisions. Piper McDonald, who has Junior Olympic experience, will be a freshman, who will make a strong returning group even more formidable.   The Storm is so capable that it would not be a surprise if they were superior to Glacier Peak of Washington.

Taryn Rawlings of Wilsonville and Jenna Mattox of Bend placed second and third respectively last fall and Katie Markwick of Hermiston earned 4th, so this trio should be expected to do well again.  All three will have to improve their times to be a threat to Megan Fristoe, however.    Shannon Susbauer of Milwaukie claimed 8th last fall and really came on during the track season, so she should prove interesting to watch along with Putnam’s Kelsey Hiltsentger, who earned ninth. 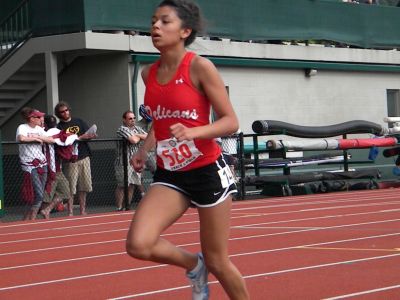 Alisha Luna of Klamath Union ran 18:36 at State last fall to record the top time of the day in all divisions.   The runner, who also plays soccer, had little competition in her division last fall and the next three best runners in the division all graduated.  Thusly, if things remain the same, it is hard to imagine her losing but development on the part of Tia Carnahan of Scappoose, who placed fifth, could put her in position to challenge.    Sierra Brown of Hidden Valley garnered sixth last fall and should also be a factor.   The true story in the 4A division will likely be the struggle of Siuslaw to continue its dominance.  Since the 4A division began in 2006 the school has earned a title four times with its only loss being in 2009, when Marist topped them.   Former champion Raelyn Robinson moves on to college along with a number of other key runners, so the Florence school has a number of important shoes to fill.  They at times have been one of the top teams in the state regardless of division the past few years, so the team, which should be led by Katie Potter (13th) & Katelyn Wells (16th), may still be successful this fall.

We look forward to chronicle all that transpires in the coming season knowing that the combination of a distance of three miles and a solid summer of training can offer much in change & chance.   Good luck all the young harriers and it is hoped we see a runner from Oregon earn a trip to San Diego for the national championships.    Dream high and be the best you can be. 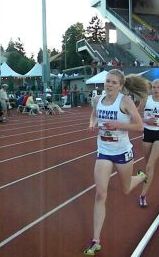