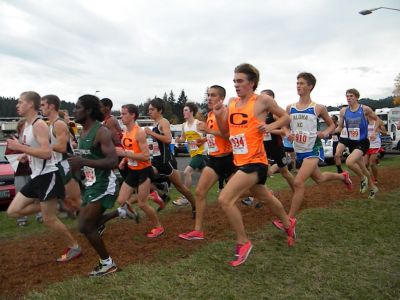 The 2011 6A individual race would appear to be a rather wide open race at least on paper, as we head into the season.    State champion Matt Melancon of Sheldon and second place finisher Andy Bennison of Central Catholic head off to college this fall, Oregon & Syracuse respectively and they will be joined in their departure by the other four members of last year’s top six leaving plenty of room for an industrious & talented runner to jump into fray and mark their mark in Oregon XC history.  Crater’s Jon Obeso, who ran 16:00, is not only the top returnee after his seventh place finish but he had the fastest time of all the runners in all divisions, who will return.     Chasing  Obeso that afternoon last November was the Beaverton duo of Dan  Oekerman and Kevin Kavanaugh, who placed  8th (16:03) & 9th (16:06) respectively.    Count on them to be in the hunt for a state individual title, as they lead their team, which should have a great deal to say in the team competition as well.   David Leavy placed 14th and is the next highest individual returnee.  Look for him to be in the mix along with Lakeridge's (Mubark ran for  Reynolds last fall)  Mubark Mebrat, who ran 16:16 last fall:  two seconds behind Leavy.

The Crater Comets ended the Jesuit & Central Catholic domination, if not outright stranglehold,  of the team championship last year and they will have Neil Siebert, who placed 17th last fall, to join Obeso in an attempt to repeat.   Beaverton  should have Hussein Mohamed, who had an off day at state last year, join Oekerman & Kavanaugh up front to form the top  1 -2 – 3 punch in the state.   Beaverton, like Crater, had some losses to their top five and will have to depend on others to fill their shoes.   Jesuit on the other hand has four returning runners from last year’s squad to rejoin Leavy, although they did graduate Jack Hagler.  Both Jesuit & Crater had very solid JV programs so they are better off than most schools.    Perennial boys power Central Catholic lost a number of their leaders beyond Bennison but they have sophomore Kyle Thompson, who had a strong track season to build a team around, so don’t count the Rams short.    West Linn, which has been a force for the past few years with Cullen Wannarka & Taylor West leading the way, graduated all seven of their team members last spring & has replaced their coach as well, so it will be a rebuilding year for the Lions in more ways than one.  With the addition of Mebrat to go with their core from last year Lakeridge could step into the State picture as well. 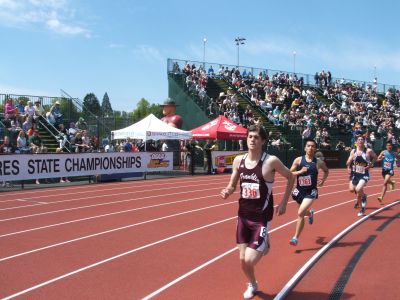 Ian Burgess of Franklin has graduated but the next three finishers in the 5A division all return to stake a claim to his title.   Travis Neuman of Summit, who was only a sophomore, edged Javier Velasco of Hermiston 16:16 to 16:17 and they should be the titular leaders, when the new season begins.  Wilsonville’s Akihara Kitagawa & St. Helen’s Ryan Beard had their own private duel for fourth with both clocked in 16:25 and they will be back again this fall.   Jackson Baker had somewhat of an off-day last fall but he had a quality spring and the Franklin star should have a solid shot to make it two individual titles in a row for his school.   Look for Hermiston, the defending team champion, to be strong once again, although they suffered some graduation losses.  Still they have tenth place finisher Eduardo Juarez back along with Jose Macias, who had a fine track season.   The most likely suspect to take the team title among the guys would appear to be Summit, which has its top six all returning.  Corvallis, which had a strong squad last year, will have most of its team to replace & will be forced to rebuild.

Don’t let the fact that Zorg Loustalet runs in the 4A division fool you, because he may very well be the state’s top returner.  He is the defending champion and his time of 16:04 is the second best of those making a return engagement.  That time in itself is misleading, for he ran it virtually by himself.  The Henley harrier has the advantage of seeing the next five runners last fall moving onward, so the highest returnee in the division is Paul Adams of Mazama, who ran 16:29.   Bret Willyard of Seaside ran 16:35 to place 8th and Matt Campbell of Siuslaw came home two seconds later to finish 9th.   Siuslaw will be very difficult to beat, as they have a number of key returners but the one to watch most closely is Mitchell Butler, who was dueling Loustalet before he wiped out in the mud and did not have time to recover last fall.   Siuslaw returns six runners.   While Philomath should be tough, they will have to replace second place finisher Josh Seekatz.

Last year the top individual duel was waged by Lucien Corriveau of Chemawa & Ryan Maag of Nyssa, who both were credited with 16:15.   Maag returns, as does Corben Helt of Cresswell, who placed fourth in 16:32.    Not to be overlooked is Hudson Eustace of Cascade Christian, who placed third at state on a self-described off day.   Hudson had the temerity to test himself at Foot Locker last year and he earned a fifth place medal in the junior race, which was held on the demanding Mt. SAC course.    Save Matt Melancon, who nearly qualified for the Olympics of high school cross country in San Diego and was the West’s top alternate in eleventh place, Hudson had the race of the day for Oregon.   His avowed goal is to make a concerted effort this year and we wish him the best.   Oregon’s presence at Foot Locker has been lacking since Taylor Wallace of Henley made it for the girls and the state deserves better.   Sadly since Kenny Klotz & Isaac Stoutenburgh qualified in 2005 the Oregon guys have had only two runners (Bryce Burgess like Melancon placed eleventh at West) even come close. 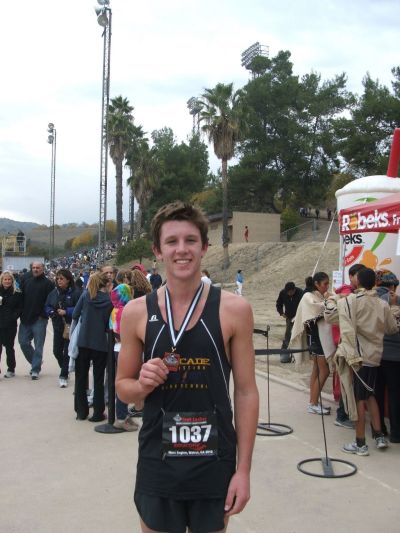 Official practice for cross country begins on August 22nd but the serious runners have long ago begun preparing for the fall campaign.   Still the season will begin soon enough.  We look forward to seeing the season unfold and see, who can stride to the head of the state pack.   The door would appear to be open for many of the guys, who are returning.