After a surprisingly cool summer Oregon runners endured a third straight day with the temperature at least 90 degrees, which was hardly conducive to fast times.   Given the conditions the general strategy for runners & coaches was to be in ‘protect mode.’   Silverton’s Morgan Anderson took the early lead and stretched it to about seven meters, as they raced  by the pond about 800 meters into the race (2:38).   She continued to lead at the mile mark, which was reached in 6:20.   Lincoln’s Claire DeVoe ran with her team mate Tess Michaelson, while Lily Mayko of Southridge remained another ten meters back & ran with a pack of Lincoln runners, that included Maya Lewinsohn, Becca Pearson & Lauren Lykins.

The Rood Bridge Park in Hillsboro is one of my favorite courses in Oregon, as it offers some interesting trail aspects, plus reasonable hills and happily a bit of shade today.  There was a mild breeze, as well, once the runners emerged from the wooded area, yet it was still too hot to be cavalier with one’s tactics.    Claire DeVoe held back, as per coach’s orders, but had moved to challenge after about a mile and a half and by the 9:00 minute mark near the bridge she had assumed possession of first.   The early pace began to take its toll on Anderson & she ran for a time in third place behind Michaelson.

DeVoe went on to secure her second victory of the season in a time of 19:44.  Lily Mayko moved well late in the race to edge Morgan Anderson, who regrouped to claim third, as both were credited with a time of 20:32.   Tess Michaelson   finished a lonely fourth in 20:52 and Maya Lewinsohn (21:32) garnered fifth.   Becca Pearson made it three Lincoln runners in a row with her time of 21:37 and pretty much salted away the victory for her team.   Lauren Lykins (21:50) of Hillsboro finished seventh & Zani Moore of Jesuit followed in 20:58.   It should be noted, that Jesuit had already sent its varsity to compete in the Walters meet in Spokane, so the team results from this race are skewed.   Kelso runners Susan Dahl & Jessica Bork rounded out the top ten & Melange Gavin of Jesuit was eleventh.

Early into the boys’ varsity race a phalanx of Jesuit runners near the front gave the impression that it would be a Jesuit rout but after about half a mile things had changed considerably.   That first impression was quite deceiving and the race soon turned into a three-way battle for the  lead between Justin Rocereto of Southridge, Alex Joseph of Jesuit and Ryan Byrd of St. Helens.   Well behind that trio was Bo McCullough of Hillsboro.

With the temperature as high as it was, the mile split was rather fast at 5:09 and it probably did take its toll in the later stages of the race, yet the final times were surprisingly strong considering everything.   That said Rocereto & Byrd broke away and waged their own private battle for the remainder of the race.  As they raced to the finish up the last hill Rocereto had the lead but Byrd was in full flight.   The late bid came up a bit short, although a longer race might have made a difference, but those things are hard to tell.   The end result saw Justin Rocereto claim the victory by a second over Ryan Byrd with a time of 16:26.   The time was not far off the record set by Michael Dueker in 2008 of 16:07.   Bo McCullough of Hillsboro earned third with 17:23 and Tanner Smith of Lincoln followed four seconds later.  Nico Banks of Lincoln made it two in a row for his team and was chased across the line by Nic Palladino of Southridge (17:39).      Connor Niemi of Mountain View (Wa.) earned eighth ahead of Alex Joseph (17:42).   Ben Campbell of Lincoln finished ninth & Jackson Coleman of Jesuit placed tenth (17:54).

Unofficial totals have Lincoln winning the girls’ team race with a low score of 36.  Jesuit placed second with 61 points and Southridge took third with 88.  Lincoln also scored in the guys’ race with  59 points to beat Jesuit by 20.    Southridge finished in third with 92 points. 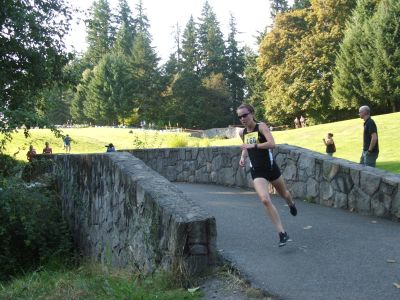