Washington senior prep runners Maddie Meyers and Jacob Smith delivered the goods on Saturday in the Jim Danner featured races at Portland Meadows Racetrack yesterday.   They ran in dominating fashion but a number of precocious freshmen from around the northwest ran very solid races to announce that they are very likely to be heard from down the road.   The races, which are part of the NXN Series & is billed as a Pre-National meet, was run on the same course, which in December will be a cold but very wet quagmire,  honors the memory of Aloha’s Jim Danner.  Danner the former Aloha coach built his team into a formidable state power in the 1980’s and also began the Aloha Invitational, which was the forerunner of today’s race.

The girls in the Danner, Championship race, got out fast yet delivered a quick surprise, when Maddie Meyers of the Northwest School in Seattle bolted from the line early and appeared intent on a wire to wire victory.   She held the lead at a hundred meters, as the runners raced down the course and out of sight.   There, well out of sight of most fans, a somewhat surprising event occurred:   a number of runners decided to keep her company.   Meyers, a two-time Foot Locker national finalist, is not only a very fine runner but she is intelligent too and the senior stalwart took advantage of the company on a very warm day with the temperature already over 81 degrees tucked into the small pack of challengers to run the early portion of the race with company.

The runners returned to view prior to racing in front of the stands and there was Maddie running comfortably in a pack of five runners.   Holding a slight technical lead was Idaho’s Sam Mckinnon, a sophomore who had already run the Camelsback Invitational plus the Clash in the Valley in her home state was making it clear that her running this year had moved to a new level.  Next to her was Morgan Lira of Valley Christian in San Jose, who had won the Earlybid race at the beginning of the season.   Maddie ran patiently in third, while Jordan Mathes, a senior also from Mountain View of Idaho ran off to her side in fourth, while Rachel Bush of Redondo Union held fifth just back of the previously mentioned  pair.

It was now nearly eight minutes into the race and off the final finishing positions are already fairly well set but with the sun beating down and few clouds to offer cover more than a few runners were going out very conservatively.  It was well back to the next pair of runners, who headed the races main procession of runners.  The leaders quickly raced out of sight on the eastern end of the course and headed for the two camelback hills (hills is hardly an accurate term, as they are more like brief grades up a slope, which serve mainly to break a runner’s stride and nothing compared to a true XC hill but it is Oregon after all) and then they headed towards the bales of hay.   With the course firm and dry the hay is barely a nuisance but in December, when runners will be sinking into the Knight swamp, they will take on another and far less friendly aspect of the race but yesterday Maddie, a national steeple chase record-holder, and the others scampered over them as they might avoid a blown candy wrapper.

The elapsed time was now 8:50 and in that relatively small interval of time some significant changes had taken place.   Morgan Lira was racing on the lead with Sam Mckinnon, while Maddie was biding her time just a bit back but Jordyn Colter of Colorado had moved into contention & was clearing the bales with Meyers.   Shannon Susbauer of Milwaukie, who has really jumped a plateau or two the last six months, assumed fifth place, while  Alexa Efraimson, a freshman from Camas, Washington ran another three meters or so further back.

That group would remain together through the two mile mark, which was reached in 11:30, but was reduced by one by the time that they had returned by the clubhouse stands, which was by the future finish line.  Lira now held a distinct, although slight lead, over Colter with Meyers still tucked behind and Samantha McKinnon just off Meyers’ shoulder.   The question now had registered in my mind was, if Meyers was Ok and simply biding her time  or was she vulnerable on this energy-sapping day yet there was still little change after cruising over the camelsbacks & then negotiating the hay.   Sam Mckinnon actually was on the lead just in front of Meyers, while Lira held third and Coulter was just a tad behind in fourth.

With the nuisances out of the way Meyers quickly answered the question about her strength and she asserted herself as she headed back out of sight.   Her move apparently surprised Colter, who gave up precious ground quickly even as she secured her hold on second.   The rigors of the pace and the sun finally caught up to Lira & Susbauer, who began to drop back late.   It had been 12:14, when Maddie began her drive to the finish and she rolled through the 4K in 14:15 and appeared to have the race well in hand, which she did in a way. 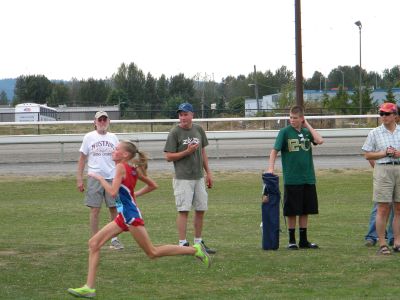 Maddie cruised down the final straight and headed into the finish chute with a time of 17:38 – her second sub-17:40 in two weeks and on a very hot day.   It was another impressive run by a true champion but Colter made sure that discerning fans had something to remember as she all but flew down the final straight.   With a long flowing stride that is much longer than her diminutive size might suggest, she devoured the remain distance to roar home in 17:41.   Alexa Efraimson became the third girl to break seventeen minutes, as she closed well to claim third in 17:58, while Sam Mckinnon narrowly missed her goal of sub-seventeen but still came home an impressive fourth in 18:03.

Sara Tsai of South Eugene is another freshman, whose appearance on the Oregon scene has been anticipated.  She ran with her team mate Erin Clark and was well back in the pack early.  After the halfway point they moved together and threaded their way through the pack but late in the race Sara moved on ahead and came home a very solid fifth in 18:06.   Olivia Anderson of Cherry Creek (Colorado) placed sixth in 18:19 and was followed by Erin Clark, who was bothered by the heat yet still ran a fine 18:22.   Morgan Lira held on for a game ninth (18:39) and was followed by Ashley Cope of Vista, who ran 18:45.   Rachel Atwood, who won her division in the earlier Capital Invitational, took eleventh with 18:46 and Jordan Mathes earned twelfth in 18:48.   Californian Cara Ulizia ran 18:50 to take 13th ahead of the valiant Susbauer, who ran 18:53 and will be heard from later for sure.

Gracie Todd of Sheldon is yet another freshman, who made her presence felt by winning the Girls’ Division 1 race.  Her time of 18:37 left her well ahead of the competition, which included second place finisher Parkes Kendrick of Grant, who ran 19:03.   Megan LeGresley of Redmond claimed third with her time of 19:14, which was two seconds ahead of another noted freshman:  Brenna Peloquin of Gig Harbor, who finished fourth.  Kelly O’Nill of Lakeridge, who noted after the race that she went out a bit too fast on a hot day was fifth with 19:29.   Alexis Fuller of Union, Washington rolled home in 18:31 to easily vanquish the Division 2 filed.  Alexis had earlier defeated Efraimson in the Run-A-Ree, so one has to wonder how she might have fared and even changed the complexion of the girls’ Danner race. 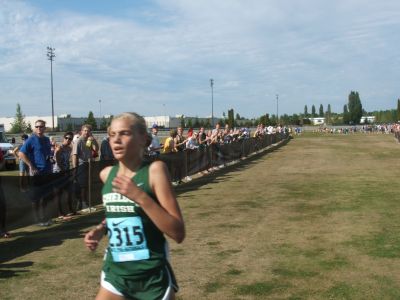