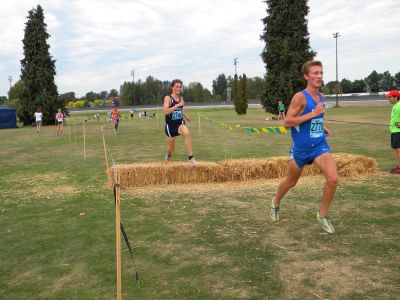 Last week Jacob Smith battled Foot Locker national finalist Nathan Weitz in a brilliant head-to-head duel, which saw both runners register in the national consciousness by recording sub-fifteen minute times.  Yesterday the Wenatchee whirlwind left no doubts by setting a blistering pace on a day in which the temperature kept climbing.   The only minor respite was a slight increase in the cloud cover but by the time that Smith had reached the clubhouse, he had already opened up a wide gap over his closest pursuers, who were Korey Krotzer of Auburn Riverside and  Dylan Blankenaker of Ramona, California.  Going into the race they were the two runners, who appeared the most likely to offer a challenge to Smith but although Krotzer zipped through the mile in 4:50 he was far behind Smith, who seemed intent in taking no prisoners.   The early going saw Korey & Dylan joined by Jose Herrera of Madera South, Wolfgang Beck of Gig Harbor & Izaic Yorks of Lakes.

Although the clouds rendered a bit of respite to the runners, Smith was offering only unconditional surrender, as he continued to set a torrid pace.  The two mile mark was reached in 9:50, which reduced the chase pack to just two runners:  Krotzer & Blankenbaker.  Yorks and Beck dropped off the pace as the heat and Smith’s boldness began to take their toll.

While Smith pushed himself over the camelsback & then the hay bales, Blankenbaker seemed to gather strength and he left Krotzer, who was now visibly bothered by the heat, and took off Smith.   Jacob for his part may have finally felt the effects of the day’s environment, yet he came home looking smooth & fluid and the only disappointment was for fans at the finish line, who had rooted for a time under fifteen minutes.  In the end he was credited with a time of 15:10, which was only two seconds ahead of Blankenbaker, who, although he closed well, was still well behind the leader, when you view the final picture.   Still it was a solid effort.  Krotzer, who won last week’s Fort Steilacoom Invitational, came home third and alone in 15:24 & Izaic Yorks of Lakes earned fourth with 15:33. 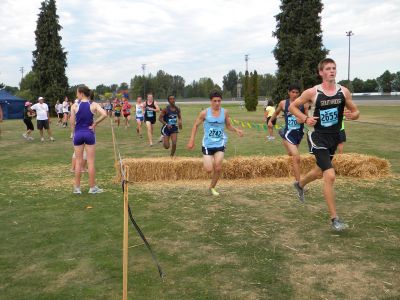 Wolfgang Beck, who missed most of last fall with pneumonia & even had to sit out last week’s Sundodger Invitational took fifth in a hard-earned 15:45, while Frank Lara of Strake Jesuit in Texas ran 15:47.   Nicholas Boersma, who ran such a brilliant race last Saturday at Sundodger, did not do probably as he had hoped on Saturday, yet he still raced home in a fine 15:49 to stake his claim to seventh.   Joe Hardy of Seattle Prep closed well to take eighth in 15:49 to nip Jose Herrara, who also was credited with a version of that time.   Keegan Symmes of Skyline rounded out the top ten with his 15:51 clocking and Brian Einstad of South Eugene secured eleventh with 15:51 and became the top Oregon runner.   David Leavy of rival Jesuit followed a second later and Omar Torres of Warren placed 13th with 15:56.  Ferris’ Alex Kinsey crossed the line one second later to earn 14th ahead of Kyle Thompson of Central Catholic.  Thompson, I believe, had the distinction of being the third sophomore in the race.

Alec Temple of Redondo Union took control of the boys’ Division1 race early and rolled to victory with a time of 16:06.  Roman Kirkov of Union placed second in 16:14.  Conner Niemi of Mountain View in Washington won the D1 race for guys with  16:33 and the top Division 3 boys were Alex Dillard of The Dalles-Wahtonka (16:08) & Colby Gilbert of Skyview, who ran 16:28.   The Danner team title went to Gig Harbor with a low of 126 points.  Madera South placed second with 147 & Ramona had 167.  Jesuit placed fourth with 171 & was the top Oregon team. 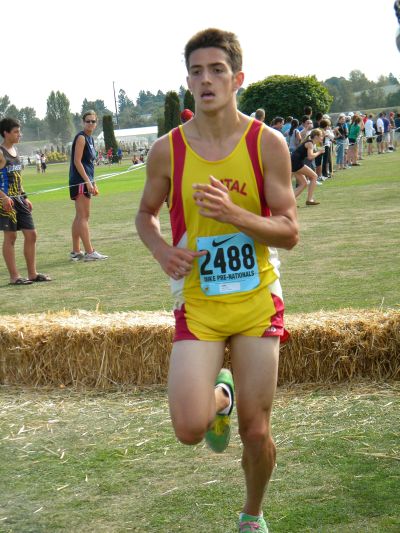