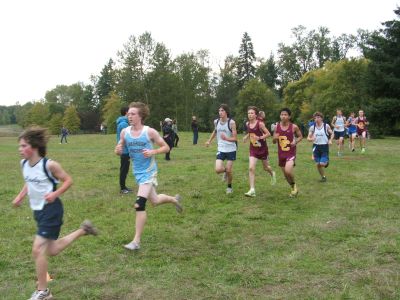 There are times we get complacent and think that the only action that is worthwhile takes place at major events.    That is not the case, when we have a kids-first attitude, and simply watch the delight in runner’s face when they have run their own personal records.  There was a fair amount of that today but in spite of the small field there was also drama as some etched their mark in the historical record.

The setting was Molalla River State park in Canby, where the Mt. Hood Conference and Three Rivers League held a Cross-Over meet.    With the formidable Central Catholic boys on hand something worthy of note was a distinct possibility but Kyle Thompson, who is but a sophomore, created a stir by racing through the mile in 4:48.   Fans of course immediately noted his huge lead, which was already about twenty seconds.   There were others, who noted that a mile that fast on the Canby course is a rare event.  Looking relaxed and extremely fluid Kyle continued to run against his silent opponent time.

He ran out of sight again until late in the race, which only added to the speculation but, when he crossed back over the footbridge leading from the back portion of the course, it became apparent that he had a chance at the course record.  The record of 14:42 was established by Eric Logsdon in 1999, who should need no introduction to Oregon XC fans.   After making his final turn for home Kyle pushed up the final grade and it was not until he got closer that it was apparent that the record would stand.  Still his time was a most impressive 15:51, which places him squarely in second on the all-time list.   Third on that list is 1986 State champion mark Webber, who was at the race appropriately working on the race stats on the computer.  Mark ran 15:59, so now there are three runners, who have managed to break sixteen minutes on the challenging course.

Barlow’s Jaclson Hazelnus followed in second with 16:44, which is a strong time for the course.  He was followed by Austin Burns, also from Barlow, who ran 16:48.   Central Catholic’s Andrew Green & Sam Lomas, who both ran versions of 16:50 placed fourth & fifth and were followed by Jacob Campbell of Barlow, who ran 16:52.   Central Catholics Dante Dalla Gasperina led a trio of CC runners including Gunnar Vik & Jean Baptiste Tooley, who effectively ended the team battle.   Austin Kettleson of Barlow placed tenth in  17:41 and Morgan Webber followed in eleventh in 17:47.   Morgan’s run was historic in its own right for his mark now has him lodged at number 48 on the Canby All-Time list.

The boys’ team battle saw the Rams finish first with a low of 25 to top Barlow, who had 33.   Canby finished third with 84 points, while Lakeridge, which had 99 and Gresham, who had 150.     The Barlow grils on the other hand triumphed in their race defeating second place Canby 39 to 50.   Lakeridge took third with 63 points edging Central Catholic by a point & Gresham had 130.

The girls’ individual race saw Lakeridge runners Lis Newton & Kelly O’Neill run together the entire race.  O’Neill, who was likely saving energy for Saturday’s Concordia Classic, held back at the end to allow her team mate to win.  Both ran 20:52 and change.   Mandie Maddux of Barlow earned third with 21:26, while Krissy Peterson of Canby placed fourth, as her time of 21:21 eclipsed her former PR on the course.   Central Catholic’s Maggie Riley claimed fifth in 21:26 giving her a seven second margin over Ann Jensen of Barlow.   Barlow’s Rachel Collmer came in seventh with 21:34, which was four seconds better than Julia Stephenson of CC.   Canby received a very valuable ninth place from Erica Nizer & her time of 21:43 allowed her to join Krissy Peterson on the all-time girls’ list.   Katie Johnson of Barlow (21:53), & Elizabeth Hinz of Canby (22:12) rounded out the top eleven finishers.

It was an ideal day for running and many runners took good advantage of it.   In the end it was a cross country rejoinder to the old adage that good things can come in small packages.