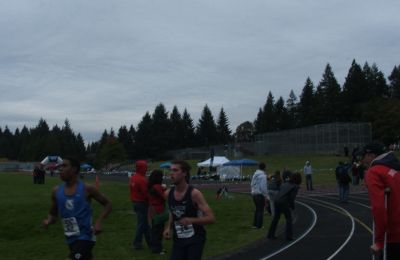 Cool temperatures, cloudy skies & a dry course greeted runners and fans at Clackamas Community College on Wednesday and numerous runners took advantage of the situation, as they made their cases for State literally on the run.    Rachel Crawford of Oregon City bolted from the line with the crack of the gun and led the field out of the track area and onto the back portion of the course.   Krissy Peterson of Canby & Kelly O’ Neill of Lakeridge were in hot pursuit just ahead of the remainder of the league.

By the time that they had run around a half mile & wound their way back up hill, which was near to the starting area, Kelly  had assumed a good fifteen meter lead over all challengers.  Crawford led the rest of the top challengers at that point, while a pair of Lakeridge runners raced a bit further back.   The time was about 2:30 and in little more than another quarter mile O’ Neill had opened up a good thirty meter lead.

gap over any would-be challenger.   With over a one hundred meter lead at that point there was only a question of her margin of victory.   Kelly ‘s  teammate Lia Newman had taken over second by that time and she used the ensuing distance to confirm her grip over second.

Looking strong yet fluid the Lakeridge star raced home in a time of 18:21:  the second best time in Three Rivers League history and not far off of the 2006 record of Claire Michel, who now runs for the University of Oregon.    Placing second with 19:44 was her team mate Lia Newman, who ran 19:44, while Rachel Crawford earned third with 19:56 in spite of her brisk start.  In so doing Rachel claimed the first of the four individual berths in the upcoming State meet.

Lily Chamberlain of Grant led a mini-parade of three General runners, who aided in the team’s winning total of 41 points.   Chamberlain was clocked in 20:15 & was followed by Christina Mulch & Libby Kokes.   Kayla McNeeley of Clackamas placed seventh & earned the second individual State qualifier with her time of 20:29.   Rebecca Donnelly came home 8th in 20:30 and Krissy Peterson of Canby finished two seconds later, as both runners will move on to Eugene.   For Krissy it will be her second trip to State & she is only a sophomore.

Miranda Nelson of Oregon City followed in tenth place in a time of 20:36 and just missed qualifying for State, while Brenna Wolf of Canby earned eleventh.   If the league recognized its most improved runner for the year, Brenna would be the recipient.    As noted Grant won the team honors but Lakeridge placed second with 65 points to take the other team ticket to State.  Canby finished third with 89 points, as West Linn placed fourth with 97.

The boys’ race saw Morgan Webber of Canby and Nathan Normo take the lead early and remain there, when they returned to view and headed up the hill at the 2:11 mark of the race.   Safely tucked away in third place at the time was Grant ‘s Andre Walker.   During the 400-600 meters prior to the track Jared Bell of Lake Oswego joined his team mate at the front, while Walker still shadowed in third & Webber had fallen back to fourth.

Once again the leaders raced out of sight and by the time, that they returned to the slight up-grade the race had changed complexion.   Andre Walker led the way at that point (10:33 in the race) and was trailed by the Lakeridge duo of Julian Heninger & Mubark Mebrat.   Nathan Normo ran a few yards back in fourth and appeared to be in trouble.   Such was not the case, however, as Normo passed the Oswego duo and moved up to challenge Walker on the far side of the course.

The two pressed each other the rest of the way, although Walker was able to gain ground late in the race to triumph in a time of 15:45 – the fastest time since 2000, when Kalen Abbott won.  Walker’s time in fact appears to be the fourth fastest in league history.   Nathan Normo secured second place in 15:48 in a time that most years would have easily have seen him claim victory.   Julian Henniger claimed third in 16:05 and Todd Macdonald of Lake Oswego took fourth a second later.

Mubark Mebrat ran 16:07 to garner fifth two seconds in front of Jared Bell.   Nathan Meeker of Oregon City annexed the second of the individual berths to State behind Walker with his seventh place finish in 16:13.  Also earning trips to State as individuals were Connor Cushman of West Linn (8th – 16:16) & Cieran Smythe of Clackamas (9th – 16:24), while Bradley Laughlin of OC just missed with his time of 16:41.      Daniel Slaughter of Grant finished 11th with a time of 16:45.

Lakeridge won the team victory with a low of 55 points & Lake Oswego gained the other team qualifier to State with their second place effort of 61 points.   Not far behind in third & fourth place were Grant with 70 & Oregon City with 71 points.

Our thanks to MArk Webber of  Webber Consulting for his ever prompt & efficient  posting of results, as well as officials of the Portland Running Company, who were on hand to provide support.   Good luck to all runners in Eugene. 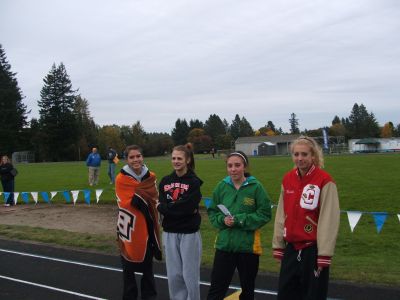