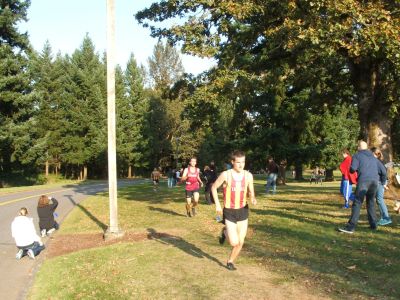 For the second straight day Clackamas County Community College hosted a  District meet.   The temperature was a little warmer yet it was still an optimal weather day to run a distance race.  The race will be memorable in one respect for this was probably the last time that a race would be run on the ‘old course’, as the college plans to construct a brand new course on the opposite side of the road.

The girls’ varsity race, which was run first,  almost had the look of a casual training run at least for the leaders.   Out in front from the beginning were Tualatin team mates Kristin Coffman and Alexandra Cross, who are best friends as well as training partners.   The duo worked together for the first two laps of the course and went through the two mile mark in 12:15.   It was only after that point that the pair began to race each other and Coffman pulled away on the back side of the course, when they were both out of sight.

By the time they appeared in the distance by the tree line, which is on the opposite side of the baseball diamond, the race was essentially over given Coffman’s lead of nearly a hundred meters.   Kristin finished first in a time of 19:10 and Ali Cross claimed second with 19:24.  Both earned individual bids to the upcoming State meet.    Elena Torry-Schrag of Forest Grove followed in third place with a time of 19:37, as she led her team to a first place finish and a berth at State.   Fittingly Talli Koskela of Newberg, whose team placed second & will also go to State, followed her in fourth place (19:42).   Olivia Masek-McIntosh of Forest Grove came home in fifth place with a time of 19:52.

Olivia would be the last runner to break twenty minutes and after her a steady parade of runners followed her across the finish line.  The first of that group was sixth place finisher Lauren Lykins of Hillsboro, whose time of 20:19 earned a trip to State.  Claire Lawson of McMinnville came in with a time of 20:21 placing seventh and secured the last individual berth to State.  Just missing a trip to Eugene was Irene Pia of Newberg, who placed eighth in 20:30.  Elizabeth Dean of Tigard, Rubi Vergara-Grindell rounded out the top ten.

The Forest Grove girls earned the Pacific crown with 45 points and Newberg also secured a trip to State with their total of 63, which edged hard-luck Tualatin, which had 65 points.   Tigard took fourth with 84 points.   Forest Grove also garnered the guys’ title with 42 points to easily best Tualatin’s total of 73.   Tigard earned third with 88 points & Century was fourth.

In the boys’ race Forest Grove’s Tyler Shipley & Geremia Lizier-Zmudzinski ran together the bulk of the race passing the two mile mark in 10:13.   It was Shipley, who pulled away’ in the later stages of the race & scored the victory.  His time of 15:58 was the only mark under sixteen minutes.   Geremia followed in second with a time of 16:02.   Tualatin’s Nathan Love came home in 16:12 to take third & Nic McDaniel of McMinnville earned a berth in the State meet with his time of 16:28, which was also good for fourth place.   The qualifiers to State as individuals all finished in arrow with Hillsboro’s Bo McCullough taking fifth in 16:34, Tim Rice of Century placing sixth with 16:46 & Newberg’s Bailey Peterson (7th – 16:46) claiming the final berth.

James McCahon of Forest Grove finished 8th in 16:49 and Tigard’s John Walker was ninth in 16:52.   Tenth place went to Allred Scott of Tualatin, while Scott Rice of Tigard  finished eleventh.   Good luck to all the teams and individuals, who qualified for State. 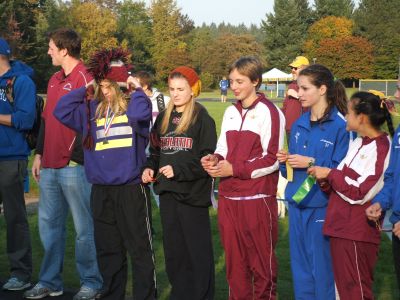