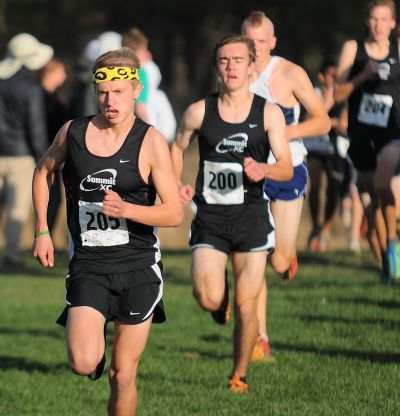 pic of Travis Neuman & Eric Aldritt thanks to Dave Clark

Megan Fristoe and her Summit team mates put in a dominating performance in the Special  5A District at the Pine Tree Nursery in Bend on Friday.   Megan Stormed to victory with a scorching 17:39.6 on a course that is at altitude.   Her team mate Ashley Maton placed second in an excellent time of 17:57.   Piper McDonald (18:18) & Kira Kelly (18:32) secured third and fourth and it was only the fifth place effort of Jenna Mattox of Bend, who prevent a sweep of the top five runners by the Storm.   Jenna was timed in 18:50, which was only a bit ahead of Sara Fristoe ’s  solid mark of 18:56.  Keelin Moehl, also from Summit, followed in 19:10 to solidify the victory.

Dana Greenblatt of Ashland took eighth with 19:13 & Melissa Hubler of Bend placed ninth in 19:21. Macaulay Wilson’s tenth place finish made her the first finisher from Mountain View and Tess Nelson of Summit claimed eleventh with 19:30.   Jessica Wolfe of Bend rounded up the top dozen runners with her clocking of 19:36.

The young ladies from Summit were so strong that their “B” team would have finished third behind the Bend team, if the rules had allowed them to compete.   Hadley Schoderbek led a sweep of Bend runners in the JV race and her time of 19:30 would have placed her in the top dozen girls in the varsity race.   Hailey Hewitson Olivia Moehl & Jessica Cornett all broke twenty minutes and Madison Walker barley missed.   The official team results for the girls were 16 to Summit & 58 for Bend, which also earned a trip to Eugene.  Ashland finished third with 76 points, while Mountain View scored 89.

As impressive a display as the girls gave the Summit guys were nearly as dominant.   Travis Neuman continued his winning streak against Oregon competition by romping to victory in a time of 15:20.   Once again his closest competition came from his team mate Eric Aldritt, who on Friday placed second in 15:54.   As in the girls’ race the Summit guys took third & fourth, as Luke Hinz (16:06) & Matt Maton (16:11) secured the next two places.

Jake McDonald (16:22) & Riley Anheluk (16:25) of Mountain View placed fifth & sixth and Ashland’s Sam Jackson was clocked in 16:25, as he earned seventh.   Sammy Naffziger of Summit garnered 8th in 16:36 to round out the Storm scoring with its low of 18 points.   Mountain View runners claimed the next three places, as they earned a State berth with 42 points.   Finishing ninth through eleventh were Chris McBride, Will Stevenson & Dakota Thornton, who as noted, ran for Mountain View.    The final team scores included Ashland’s total of 7 & Bend’s 102 points.

As we look forward to State the Summit girls appear very solid and it goes beyond their top five.   The Summit guys will be very tough to beat in 5A as well in fact they would be a force to reckon with no matter what division one considers.    Then again with Megan Fristoe & Travis Neuman leading the way both teams should get off to a very good start.  Good luck & safe travel to all the runners, coaches, families & fans as they head to Eugene.