The rain was really falling, and it increased as I headed to Lane Community College with my enlisted help.  This year, the course would be different than last year, but it would be the same as many prior years.  As I drove, I got excited by the team races and the thought that it could be a Summit sweep in the 5A division. 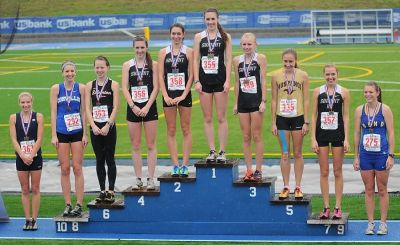 
Indeed, there was a Summit sweep.  Summit took both girls and boys titles (individual and team).  The Summit girls took 1-4 and had Megan Fristoe (1st with 18:07), Ashley Maton (2nd with 18:30), Piper McDonald (3rd with 18:36), Sara Fristoe (4th with 18:39), and Kira Kelly (7th with 19:00) on the podium.  The top 3 girls were under Megan’s winning time of 18:37.  The Summit boys had Travis Neuman (1st with 15:32) and Eric Alldritt (6th with 16:05) on the podium.  Not only did the Summit team win the individual and team titles, but Megan Fristoe and Travis Neuman had the top times of the day.  The Summit girls won with a low 16 points while the boys won with 44.  The 2007 Crater girls won the team title with the same low score of 16.  The only boys team with a lower score was Siuslaw with 36.  Jackson Baker of Franklin gave Neuman a battle and should not be overlooked.  Alex Dillard of the Dalles Wahtonka passed Baker at the finish line, but both were credited with the time of 15:36. 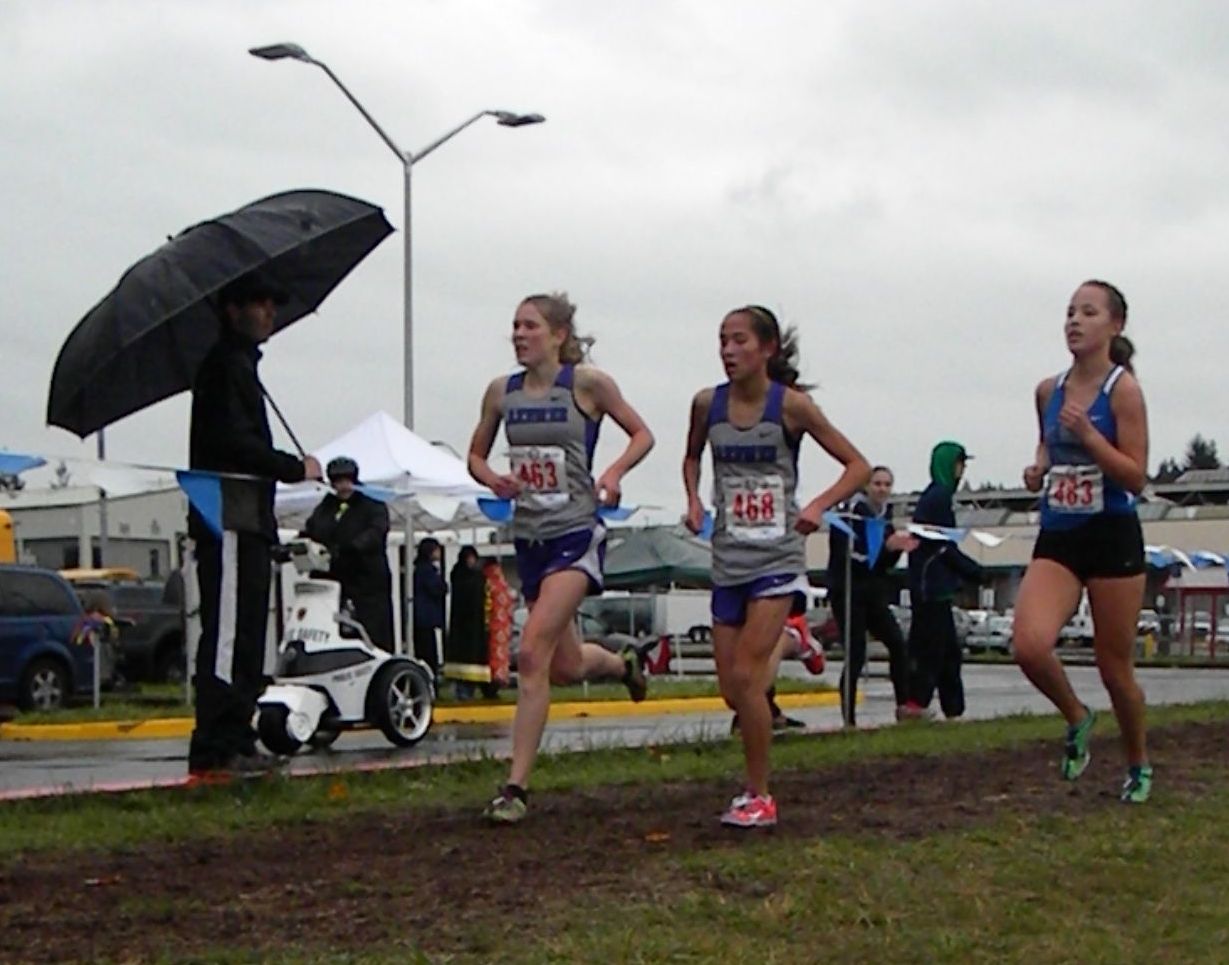 
In the past, Jesuit has dominated the 6A girls.  This year, the team race would be much closer.  South Eugene did an imitation of the Summit dominance.  South Eugene took the team trophies, but Sara Tsai and Brian Eimstad were runnerups with times of 18:10 and 15:48.  Sara’s time was a second faster than Jesuit’s Annamarie Maag’s winning time last year.  On the podium, the girls had Sara, Erin Clark (3rd with 18:17), and Paige Kouba (9th with 18:41) while the boys also had 3–Brian, Jack Wilson (8th with 16:05), and Joe Holvey (10th with 16:08).  The top 4 teams were all very competitive.  On the girls side behind South Eugene’s 53 were Crater (63), Jesuit (70), and Sunset (94).  Behind South Eugene boys’ score of 56 were Central Catholic (77), Crater (93), and Jesuit (97).  Individually, the winners were 2 crowd pleasers and both sophomores, so they should be heard from in the future.  Paige Rice of St. Mary’s Academy who was last year’s runner up ran with the South Eugene duo before gapping them and finishing with a fine time of 18:09.  Central Catholic’s Kyle Thompson led early, did not give up his lead, and finished with a time of 15:41. 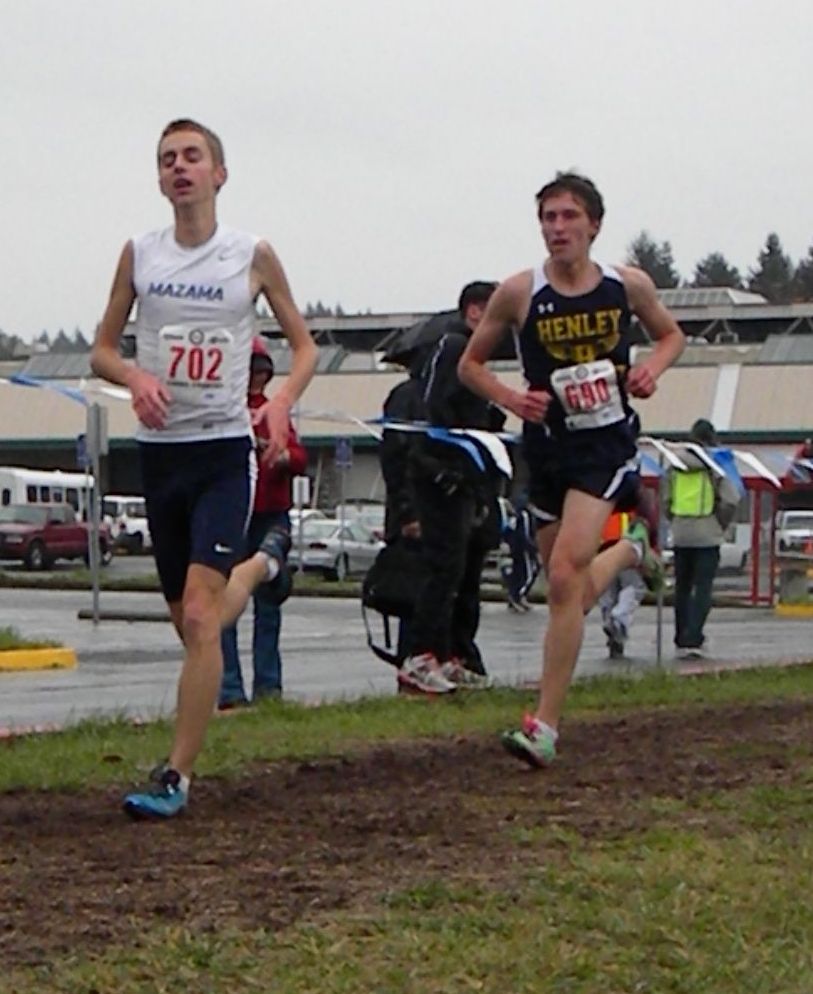 
The 4A boys was a duel between Mazama’s Paul Adams and defending champ Zorg Loustalet of Henley for a good part of the race.  Matthew Campbell and Mitchell Butler, the duo from Siuslaw kept picking off runners, parted the 2 early leaders, and battled each other for runnerup.  The finish was Adams (15:48), Campbell (15:54), Butler (15:57), and Loustalet (16:00).   Siuslaw topped North Valley 53 to 87 to capture the team title.

The 4A girls race was a repeat of last year.  Alisha Luna blasted out and never lost her lead.  She won with a time of 18:32 which was 4 seconds faster than last year.  The only runners to stay reasonably close were Sierra Brown of Hidden Valley, the runner-up with a time of 18:57, and  Katy Potter of Siuslaw (3rd with 19:23).  Team-wise, it was tight.  Scappoose won with 82 over Klamath Union (83) and Sisters (88).

In the 1A/2A/3A race, the leaders were teammates Joseph Ewers and Zach Holloway of Central Linn.  In spite of falling at the mile, Ewers regained position and won with a time of 16:02 over Ryan Maag of Nyssa (16:14) and Zach Holloway (16:16).  Valley Catholic took the team trophy with 73.  Olivia Powell of Creswell took the individual title with 18:57 over last years runner-up Katriel O’Reilly of Union (19:04).  Union won the team title.

As a sidelight the Summit girls of  2011 compare well with the Jesuit girls of 2010, who stormed through the 6A division last fall enroute to their four place finish in Portland in the national team race.  Here are how the teams compare by team runner position.  The weather was wet both years & the course was sloppy, although it seems as if it may have been windier last fall, yet overall the condition were similar.   Note that each Summit runner tops their parallel Jesuit runner by time, while Summit's  sixth runner (Tess Nelson) has a better time than the last four Jesuit runners.   If you can find a better all team by time it would be interesting but these two teams would appear to be the best in Oregon history.   Of course Jesuit went on to a brilliant finish at Portland Meadows, and it will now be up to the Summit Storm to see how they will fare.   Each year is different & last year many of the top teams had great weaknesses at the back of their packs but no matter how you cut it the '10 Crusaders probably had the best Northwest team - save the 2005 Bellarmine  squad.   The ball is now in Summit's court to move on but judging by their State results on Saturday  it certainly bodes well.