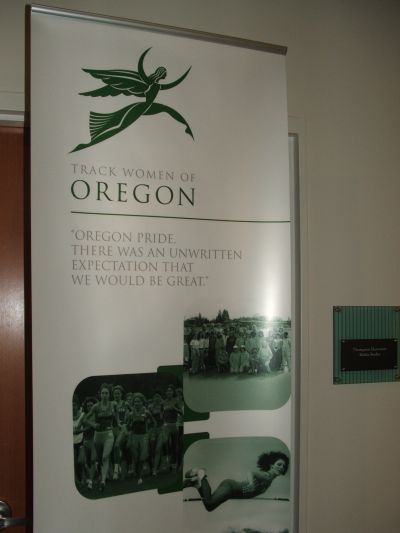 It was somehow appropriate, that watching Wednesday evening’s screening of the documentary film “We Grew Wings” took place in downtown Portland building, where the University of Oregon presents its metropolitan face.   It is after all two and a -quarter hours of driving away from Hayward Field & the UO campus.   After all the years of being the little sister program in track the location seemed to make sense.   Wednesday is mid-week and for those of us, who are Track & Field fans as well as Cross Country aficionados, it is also mid-way between meets.   In this case it was mid-way between the Simplot Games in Pocatello, Idaho and the Brooks PR Invitational as well as the Mountain Pacific Sports Federation Meet – both of which are in Seattle this weekend.    It is the action when most of the significant action takes place.

It made a convoluted sense for the presentation for the film on women’s running to take place on Wednesday, because until recently the women’s version of T & F at Oregon has been a bit overlooked and under-appreciated.   When you think of ‘Track Town USA’ the image is of the “Men of Oregon” more than likely and Steve Prefontaine more specifically.     The film is a celebration of the women’s program & after the screening of the film there was a question and answer session, which followed.   One of the individuals, who commented, was a former track & field official, who had often acted as a starter for the meets held at Hayward.  He noted, that the meets had dragged in the middle of the program due to much down-time and the inclusion of women’s action was thought to be “filler” action to essentially supplement things.    He was speaking of the pioneer days of women’s running, when women’s competition was simply an addition not to mention something a bit imposed on the men by law.   For point of reference it was in 1977, when the first track meet at Oregon included both men’s and women’s teams.

If women were regarded as filler back then, they are hardly that now.   On Saturday, when collegiate athletes toe the line in Seattle, most fans will be at least as equally concerned about how the female athletes fare, as they are about the men.   The Women of Oregon now have their own roster of stars, which rivals even their men's team athletes.  To paraphrase that old commercial:  “You’ve Come a Long Way Baby”!

“We Grew Wings” celebrates the history of women’s Track & Field at Oregon from its inception in the 1970’s through today’s current cast.   It focuses on the two championship years of 1985 and 2011 (my mind flashes to a picture of Jordan Hasay & her team mates in front of the White House last year), yet it glides through history with glimpses of the many young ladies, who made contributions along the way.  Melody Fairchild, who won an NCAA 3K championship in 1996, is noted along with Lisa Karnop & Sally Harmon among others.  On hand Wednesday was Eryn Forbes, who spoke of the program & her part in it, yet my eyes lit up, when I spied the simple signature of Marie Davis in the guest book, who was an All-American for Oregon from 1995 to 1999.   It was a quiet eloquence, which typified what the program has been at times.   Not overlooked, however, is the fact that the Oregon’s women’s program developed and over-lapped the period of Title IX, which has had a profound impact upon all women’s sport and “We Grew Wings” looks at that big picture.

Ellen Schmidt-Devlin is the producer of “We Grew Wings” and is aided by Sarah Henderson & Erich Lyttle, who were all present at the preview and are the filmmakers.   Erich & Sarah were both involved in a recent documentary on Joan Benoit, while Erich was also involved in the production of “Fire On the Track”, which relate the Prefontaine story.   The video includes scores of vintage pictures, which will stimulate fine memories of past action and success but it also uses the recollections of Leann Warren, Quenna Beasley & Claudette Groenendaal of the 1985 championship team plus  Jamesha Youngblood & English Gardner of the 2011 team to trace the evolution of the women’s program, which extends from Tom Heinonen to Vin Lananna, who directed the program at its apex.  It also seems to serve as a tribute to Geoff Hollister, whose recent passing is a loss to the entire running community after his years of contributions through many aspects of the sport.

There is much to admire about this film as well as the overall project, for it not only covers the Oregon Women and Title IX but it touches on other issues that concern women including eating disorders.    One of the viewers related that it is not just the current women, who are inspired by the fore-runners on the track but the pioneers find themselves admiring the current athletes.    After the screening a grandmother noted that she was inspired to go out and run now, so like a tune that makes you want to tap your feet “Wings” may well be a starting point for women’s track as much as it may be a reflection on the past.  The underlying message noted by Ellen is that track is not only important to the participants but it is important to others as well.

The final goal is to present the film in Eugene on June 30, 2012, which would make it a part of the US Track & Field Olympic Trails in some ways.   The principal photography will end in March but there is much to do including a book by Kim Spir, which will be published in conjunction with the film, although at a later date.   Naturally filming a production this takes funding and any contributions would be an aid and appreciated.   Ellen is a former Duck runner with an appreciation and “passion” of the sport and she now in the homestretch of this project with the finish line in sight.   Remember there was a time shortly before Ellen appeared at Hayward as an athlete in which women were not even allowed on the track.  That time was as near as 1972.  Check out their web page at:

and relive the history women’s Track & Field at Oregon and sense its spirit.