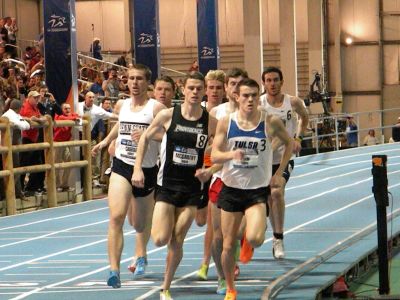 Chris O' Hare went  wire to wire in the Mile

There was much to appreciate on Saturday with numerous quality performances as well as spirited races.   In the men’s Mile Run Chris O’Hare established himself as the leader almost from the gun and led the field to a conservative split of 62.7.   It was a strategy meant to give him control and to stay out of trouble, as others battled to establish their positions.  Miles Batty of BYU, who ran a stirring 1600 meters on Friday night in the Distance Medley was tucked in third early.   O’Hare continued to roll unchallenged through the 800M in 2:05 with a chase pack in tow, that included Batty in fifth.   A 1200M split of 3:06 saw Sam McEntee of Villanova & Erik Van Ingen moving into contention.   The pace being what it had been left a fair-sized numbers of racers still in contention but it was O’Hare, who maintained his lead down the stretch and he crossed the line first in a time of 4:0166.  Rick Peters of Boston University claimed second in 4:01.78 & Miles Batty, the collegiate record-holder, ended up third with 4:01.86.  Immediately behind him were Sam McEntee at 4:01.91 and Andrew Bayer with 4:02.13.  Peter Callahan of Princeton (4:02.66) & Erik Van Ingen of Binghamton (4:02.70)

Oregon Duck fans were thrilled early in the Women’s Mile as a trio of Ducks headed the field in the early going.   Jordan Hasay, one of the favorites in the events, held sway early and was joined by Becca Friday and Anne Kesselring.  Looming just behind the trio was Lucy Van Dalen of Stony Brook.   Hasay continued on her way through the 400 Meters but it was then Van Dalen trailing and the pair remained that way through the 800M, which was announced at 2:27.   Morgane Gay of Virginia ran just a bit behind in third or fourth with another runner.    While the pace had been less than stellar for the first half mile, it was certainly brisk for the second and the leaders ran 2:11 at the end.   Still, even with that burst, there remained a number of runners with a good chance at victory coming off the final turn.   Lucy Van Dalen blasted down the final straight to earn the victory in 4:39.76.  It marked the first NCAA title for an athlete from Stony Brook.  Aisha Praught of Illinois caught Hasay just before the line to claim second in 4:39.85, while Jordan Hasay placed third (4:40.09) and added six valuable points for the Ducks.   Her team mate Becca Friday contributed five points of her own, as she sped home in fourth (4:40.24) and Morgane Gay was just off Friday’s shoulder in fifth with 4:62.   Hannah Brooks of Florida State & Agata Strausa of Florida garnered seventh & eighth respectively & Michigan freshman Shannon Osika placed ninth, while Anne Kesselring was tenth. 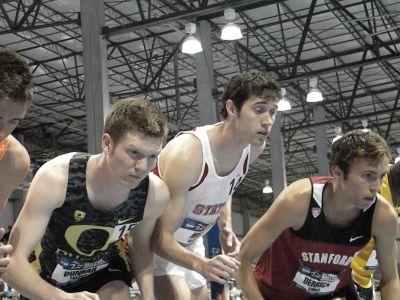 After the spirited men’s 5K of the previous evening Saturday’s 3K was much anticipated by distance fans and the race did not disappoint.   Diego Estrada of Northern Arizona led early and was followed by Ryan Hill of North Carolina State.   A first 400 of 61.7 spread out the field a bit but Lawi Lalang of Arizona was tucked in third and Chris Derrick of Stanford was fifth.   Oregon’s recent U. Portland transfer Trevor Dunbar held seventh at that point.   A sixty-four & change quarter saw Estrada still doing the pace-making (2:05) with Lalang & Stephen Sambu in tow.   Sambu, who had placed third on Friday, gave way after a 63 quarter leaving just the two at the front but Chris Derrick soon moved into contention after that and in the midst of a 62 split Estrada finally gave way and fell off the pace.  From that point onward it was the Lalang & Derrick show and the pair made sure that the crowd was entertained.   The two were running in earnest as the pace stiffened as Derrick made a bold move to the front.   Having failed to break Lalang the night before with a move at 300 meters Derrick pressed the issue and led the way to a 59.7 quarter, yet they still had a lap to go.   With fans cheering loudly Lalang struck back late and moved ahead of Derrick, who still had something left.   In the end it was Lalang, who prevailed with a winning 7:46.64.   Derrick was barely behind in second with his mark of 7:46.81.   It was a great effort and they had almost a three second gap over third place finisher Cameron Levins of Southern Utah.   Paul Chelimo of UNC- Greensboro took fourth in 7:50 and Ryan Hill was fifth with 7:50.   Stephen Sambu caught the valiant Estrada, as both were credited with versions of 7:53 and change, while Leonard Korir of Iona came home 8th in 7:54.  Thomas Farrell of Oklahoma State, Trevor Dunbar of Oregon & Elliott Heath of Stanford rounded out the top eleven.

The young women’s 3K saw Emily Sisson of Providence move to the front early with Emily Infeld of Georgetown running close at hand.   Aisling Cuffe, a freshman from Stanford, began to forge the lead soon after and held that position for a few laps.   The race had the look of a Foot Locker championship with 8 of the seventeen runners having raced in the series including Jordan Hasay, who was drafting just a little off the pace.    Alphine Tuliamuk of Wichita State took over the lead and Deborah Maier of Cal moved into contention, as Hasay held fourth.   There was some shuffling of the pack with Tara Erdmann of Loyola Marymount joining the fray.   With a number of the runners doubling back from Friday’s 5K or the DMR it made sense that a few runners were not wild about leading and after a little over three minutes of running there remained some congestion near the front of the pack.   Erdman, Tuliamuk, Betsy Saina, Jordan Hasay & Aisling Cuffe were still in that group but  over the next few minutes a number of challengers began to fade.  Tuliamuk led at 2K and was given a contest by both Erdmann & Hasay.   With a lap to go there were at least seven runners with a reasonable chance of winning but at the finish it was Emily Infeld, who edged ahead of Deborah Maier.   Infeld finished with a time of 9:15.44 to claim victory by three-tenths of a second of Maier, who earned her second straight place effort over a distance.  Betsy Saina, who had won the 5K, did not have quite enough left in this race, as she ran 9:16.16 to take third.  Jordan Hasay finished fourth for the Ducks with her 9:16.42 adding five more points to the team total, and Tara Erdmann clocked 9:16.87.   Kathy Kroeger, who had been a bit hard on herself the night before after her 5K, ran a fine race to secure sixth for Stanford in 9:17.21.   Tuliamuk faded a bit but still garnered seventh and Abby D’Agostino of Dartmouth followed in 8th.   Katie Flood of Washington contributed yet another fine effort for the Huskies taking ninth, while Lucy Van Dalen & Megan Goethals rounded out the top eleven.   Emily Sisson of Providence was the first freshman to finish taking 12th as Hannah Kiser of Idaho earned 13th.   Aisling Cuffe of Stanford and Waverly Neer of Columbia, both freshmen runners, garnered 14th & 15th with times of 9:27.57 and 9:33. 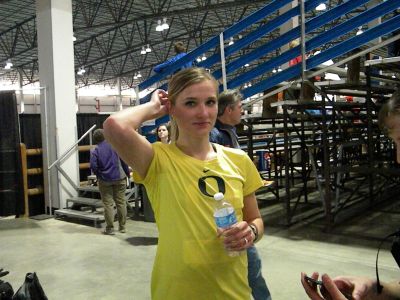 If anyone had a full day it was Brianne Thiesen of Oregon.   The fifth year senior from Saskatchewan returned to score her second Heptathlon crown with a total of 4536 points, which was just nineteen points off her recent collegiate record.   Although a bit dissatisfied with a few individual events her avowed goal was to score for the team and she certainly accomplished that with her victory.   The young athlete has had to overcome disc problems since her previous NCAA meet, so her triumph was even more special. 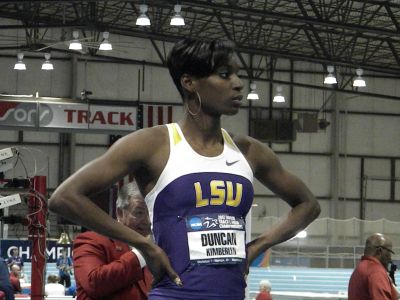 The Ducks’ prospects also received a boost, when English Gardner roared down the straight in the 60 Meter Dash and claimed a victory.  Her time was a solid 7.12.  Octavious Freeman & Aurieyall Scott, both from UCF, placed second & third.   Kimberly Duncan had a facile time in the 200M with a brisk 22.74, which was not all that far off the collegiate record of 22.40 set by Bianca Knight in 2008.  Allison Peter, who ran in the second section of the finals, garnered second with 22.95, while Kamara Brown of Texas A & M (23.05) was third.    Diamond Dixon of Kansas easily won the 400 Meter Dash in a time of 51.78 despite running in the second section of the finals.   She had a wide margin over Marlena Wesh of Clemson, who ran 53.17 in the section.  Regina George (52.54) & Lanie Whittaker (52.80) ran in the first section taking the next two places. 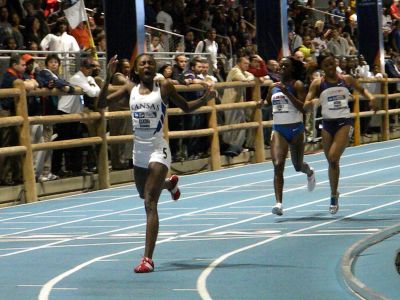 Tia Brooks of Oklahoma went 19.00m in the Shot Put to easily top the field.  Her mark was well ahead of second place finisher Jeneva McCall of Southern Illinois, who threw 17.97.   Brooks gave the collegiate & NCAA meet record of 19.15m meters a scare, while Julie Labonte of Arizona took third with 17.68 edging Skylar White of Baylor, who went 17:42.   Other women’s winners were Andrea Geubelle of Kansas in the Triple Jump (13.67) and the afore-mentioned Jeneva McCall, who won the Weight Throw with 22.90.   Brigetta Barrett of Arizona soared 1.96 in the High Jump to easily win that event.  Krystle Schade of Alabama (1.86) finished in second, while Natasha McLaren (1.81) led a bevy of athletes with the same height but earned third on fewer misses.

In other action on the men’s side Mason McHenry topped the 800 Meter runners with his 1:47.96 clocking.  Michael Prebble of Texas A & M, Erik Sowinski of Iowa and Aaron Evans of Georgia all ran versions of 1:48 in placing second through fourth respectively.     Fifth went to Patrick Schoenhall of Baylor.    Michael Berry of Oregon was an easy victor in the first section of the 400 Meter Final and then had to wait to see how his time would hold up after the section second was run.   Unfortunately both Tony McQuay of Florida (45.77) and Brycen Spratling of Pittsburgh, somewhat of a surprise in the meet overall, (45.72) were slightly faster.   Mark Niit of Arkansas, who ran in the first section with Berry, ran 46.04 to earn five points with his fourth place effort.

Jarret Eaton of Syracuse, Devon Hill of Miami & Barrett Nugent of LSU were barley separated when the crossed the line in the 60 Meter Hurdles but it was Eaton, who scored a victory.  He ran 7.54 to edge his two rivals by a hundredth of a second.  Andrew Riley of Illinois was just behind them with his time of 7.58.    There was also little to choose in the Men’s High Jump, as three individuals cleared 2.23m but the laurels went to Nick Ross of Arizona.  Darius King of Indiana & Dwight Barbiasz of Florida were credited with second & third based on misses.   There was also a tie for fourth with Erik Kynard of Kansas State and Marcus Jackson of Mississippi State sharing that placement.

The Oregon Women, who will soon be featured in a film titled “We Grew Wings”, added to their fine history by claiming a third straight NCAA Indoor Title and they did it with plenty of room to spare.   The championship was secured long before the Ducks failed to score in the 400 Relay, as they had already chalked up a total of 49 points.  Kansas finished a distant second with thirty points and LSU finished third with 27.  Texas followed with 25 points.