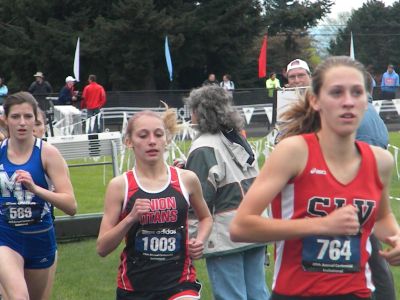 Centennial’s venerable meet, which has long been the biggest and most important in the state, produced a memorable edition this year with some brilliant racing as well as field events.   Sean Keller of Heritage got the meet off to a rousing start with a new Washington record in the javelin on his first throw.   His heave of 244-01 broke his own record and narrowly missed Sam Crouser of Gresham’s meet record of 244-02.   Keller had great series, which also included marks of 242-04 & 225-05.   A bit overshadowed by Keller’s performance was yet another solid day by Cody Danielson of Newberg, who placed second with 204-11.   Although only competing in the event this year, he has come on this spring and the Centennial meet marked his third successive week of clearing 200.  On Saturday he had a solid series of throws, that included marks of 204-01, 200-04 & 199-11.  Sam Lanton of lake Oswego (179-11) & Trevor Danielson, Cody’s younger brother, (179-09) earned third & fourth.   Kaylie VanLoo of Glencoe won the girls’ event with 147-10, which puts her on the national lists.  Kaylie also placed second in the Discus behind D’onna Robinson of Gladstone, who went 135-00, and was fourth in the Shot Put with 41-04.   Emma Collier of Warrenton claimed that event with 44-01 to best  Cherlyn Bunker of Newport, who threw 41-09.   Johna McEllrath placed third in the Shot with 41-02 and was also third in the Discus with 12-04.   Jonathan Treloggen of Gresham took the boys’ Shot Put with 56-06.75 and Alex Balducci of Central Catholic was right behind with 56-01.   Treloggen came in second in the Discus with 148-06, which was right behind Austin Hejny of McNary, who threw 149-00.  Corey Burt  of Newberg was third with 145-09.

Rocky Tufty of Sunset caused a stir in the High Jump by clearing 6-08.  He confidently noted, that “I’m not done yet!” and proceeded to make a strong effort at 6-10.  He actually appeared to have successfully cleared the height on his second attempt but just caught the bar on the way down.   Although he will have to wait another day to get the 6-10 he wants, Rocky certainly made things interesting.  Mark Scherrer of Barlow was second with 6—05.   Shelby Peterson of Century topped 5-05 for the girls with Maria Green of West Linn taking second with 5-03 as she tied Claire Alexander of Jesuit.   There was a great duel in the guys’ Long Jump with Darnell Adams of Newberg edging Alex Slattery of Lincoln 22-01 to 22-00.

One of the highlights of the meet had to be the girls’ 800 Meter run, which had a meet record of 2:11.31 that went all the way back to 1995, when Katrina DeBoer of West Linn led the way.   That mark would be revised with the aid of St. Mary’s Academy’s Paige Rice, who valiantly took out the pace and led the field with the first 600 meters.   Following in her wake were Anna Maxwell of San Lorenzo Valley in California, who was coming back from a brilliant 1500 Meter Run, and Alexa Efraimson of Camas.   Alexa took the lead on the final turn and then stormed through the final stretch to obliterate the old mark with her time of 2:08.92, which places her sixth on the national list for this spring.  Although Paige had boldly forged the trail, she still held on to blaze a state-leading 2:10.32 to edge Anna Maxwell, who ran 2:10.87.   Also finishing under the old record was Tess Michaelson of Lincoln, who ran 2:11.21.  Piper Donaghu of Grant ran a fine time of 2:12.84 to place fifth with a time, that would normally earn a victory.  Kristen Coffman earned sixth with 2:15.11 nipping Lynelle Decker of Mountain View (Wa).  Sabrina Sears of Evergreen ran 2:16, which was good for 8th and Olivia Artaiz of Jesuit followed in 9th with 2:18.  Austin Reiter of Camas and Jennifer Housek of San Lorenzo Valley rounded out the top eleven runners.    Cody Johnson of San Lorenzo Valley is used to his competition in California going out fast but he stormed into the lead early.  It was a brave move given Johnson’s limited training base due to knee issues yet he certainly looked smooth as he headed the field.   Hayden Schaffner of Siuslaw took off in pursuit and followed discreetly behind, while Andrew Gardner of Mead, who was coming back from the 1500 Meter Run and would race again in the 4 by 400 Meters assumed third.   Johnson looked strong in spite of his work up front and scored a solid victory in 1:54.75 and Schaffner placed third in 1:55.28.  Gardner closed well to earn third in 1:55.53 and was followed by Dylan McHugh of McNary & Reed Henderson of Sehome, who both were credited with 1:56.  Jean Baptiste Tooley of Central Catholic garnered sixth with 1:57. 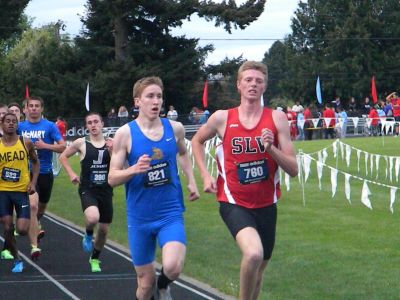 The girls’ 1500 Meter race offered the chance for area fans to watch two-time Foot Locker national finalist Anna Maxwell run and she did not disappoint.   She took off almost from the gun and set the pace and it did not take long for her to force most would-be challengers to back off and concede the issue.   Only Washingtonians Alexis Fuller of Union & Lynelle Decker of Mountain View maintained their pursuit after the first lap and they were only remote in contention about fifteen meters back.    The duo closed the gap a bit by the time that Anna passed the 400 mark in 67 seconds but by the time that the Californian covered half mile in 2:22 she had opened a gap of a good thirty meters.   Fuller had separated herself from Decker, while the chase pack led by Sabrina Sears of Evergreen & Nicole Goecke of Prairie began to reel Decker back to them.   Maxwell flashed past the 1200 mark in 3:39 with the meet record within reach, yet she was without help in its pursuit.  Her final time of 4:32.74 was the fastest in the event in years, but just a shade off of the 4:32.1 that was needed.  Still it was an impressive performance, as was the effort of Fuller, who followed in a very fine 4:39.46 – a time, which would have easily triumphed in most years.   Although it appeared that Decker would fade she gamely held on to place third in 4:44 – a second in front of Sehome ’s Emily Pettis.  Pettis edged Jesuit’s Megan Mullaney and Camille Parsons of Camas took 6th in 4:46.   Sabrina Sears also was given 4:36 and Nicole Goecke ran 4:50. 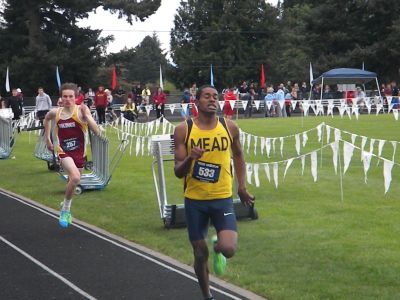 After last weekend’s sterling mile (4:10) at Mooberry Andrew Gardner was considered the favorite in the boys’ 1500M but Brett Willyard of Seaside seized the lead early and led the field through the first lap in 62 seconds.   Geremia Lizier-Zmudzinsk of Forest Group gave chase, while Gardner hung back in third.   With Willyard leading the way only five runners remained in contention including Roman Kirkov of Union and Nathan Normo of Lake Oswego.   Geremia took over the lead duties shortly after that point and led the way through 800M in 2:07.  It was still a top five but the line became more stretched out during the ensuing lap in which Willyard returned to the lead.   Gardener was looming just off the leader’s shoulder and, as he rounded the turn with 300 meters to go, he began his drive to the front.   He opened up a gap on the backstretch and then surged inexorably away to the final straight.     His final time of 3:54.93 was only four seconds off the meet record.   The Forest Grove leader closed well to overtake Willyard for second with both credited with versions of 3:56, while Roman Kirkov took fourth in 3:58.  Norma also made it under four minutes with his fifth place effort of 3:59.   Mead’s Daniel Schofield ran 4:02 to nip Jackson Haselnus of Barlow for 7th and Fletcher Hazlehurst of Franklin was 8th in 4:03.

In the 3000 for young ladies a pack of runners that included Claire DeVoe of Lincoln, Adrienne Demaree of Jesuit, Alexis Fuller of Union, Shannon Susbauer of Milwaukie and Morgan Anderson of Silverton led the way.  More often than not it was DeVoe, who was on point, but around the 1600 meter mark she forged a lead that stretched to around fifteen yards.    It remained that way for another lap or so but South Salem’s Emily Weber, who at one point early in the race was close to last, threaded her way through the field and then moved  into contention.    She took over the leader at the 9:10 mark in the race, as DeVoe appeared to be faltering, but Claire found something in reserve to retake the lead and win going away in a final time of 10:06.  Morgan Anderson, who is having a banner season, came on to earn second in a time of 10:09 finishing a second ahead of Alexis Fuller, who ran 10:09.   Emily Weber placed fourth in 10:11 and Shannon Susbauer, who like Anderson is a much improved runner this year, claimed fifth in 10:13.   Jesuit’s leader Adrienne Demaree placed sixth in 10:14.   Mary Kate McGuire of Dallas and Erin Gregoire of Beaverton both were credited with 10:20, which made them 7th & 8th on the list. 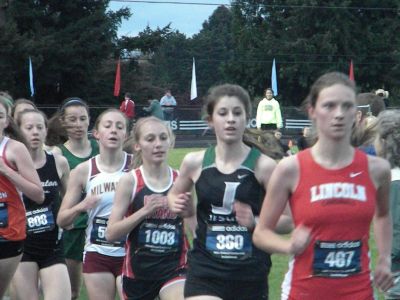 Jackson Baker of Franklin headed the guys for the first three laps and hit the 1600 meter mark in 4:44 in the boys’ 3K   Beaverton’s Dan Oekerman took control and held sway at 2K, which was reached in 5:556.   Nick Hicks of San Lorenzo Valley held second for a time and Skyview’s Colby Gilbert made a late surge to move into third late in the race.  There was much jockeying for position late but it was Oekerman, who gained control and was victorious in a time of 8:36.   Matt Campbell of Siuslaw closed well to secure second in 8:37 and Californian Hicks took third in 8:40.  Ryan Byrd of St. Helens was a second back in fourth and Nick Obletz of Oregon Episcopal followed in fifth in 8:41.  Washougal’s Sean Eustis ran 8:45 and Colby Gilbert made it three straight Washington runners by taking 7th in 8:46. 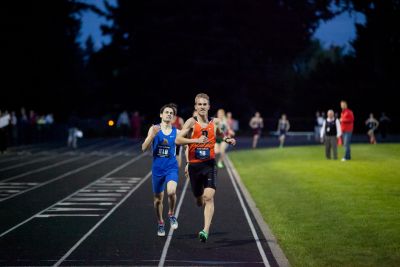 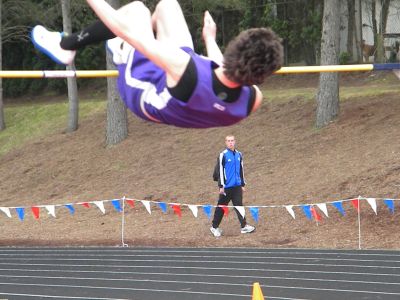 There were quality marks in numerous other events including a 48.92 by Tanner Sork of Union in the 400 Meters.   Dan Bratton of McNary ran 14.96 to edge Jacob Petrie of Newberg, who ran 15.05 and Eric Zechenelly of Sunset scored in the 300 Hurdles with 39.43.  E’lon Mack of Heritage battled Evan Maack of Mead in the 100 Meter Dash with the Heritage runner getting the nod in 11.05 - .16 better than his rival.   Wes Bailey of Mead scored in the 200 Meters with 21.76 but it was his anchor in the four by 400M of 48.5 that really turned heads.  Mead was well behind the leaders, when he received the hand-off, but at the finish it was Bailey crossing the line  ahead of his rival from Union.  The St. Mary's Academy girls also were impressive with their record  of 3:55.08 in the relay.

Centennial has been the standard meet in Oregon for 48 years and we look forward to its continued excellence.   It is unfortunate, that Nike – Oregon continue to play games, when this meet has always been strategically been located at this point in the season.   Kudos to Mead for continuing to bring their solid team year after year and it was great to see San Lorenzo Valley’s quality team lend its support.  Their coach, Rob Collins, was a star at the school in the mid-1980’s and the squad spent time touring the facilities & gazing at the record board, which included their coach.   We look forward to Mead and SLV to return to this great tradition. 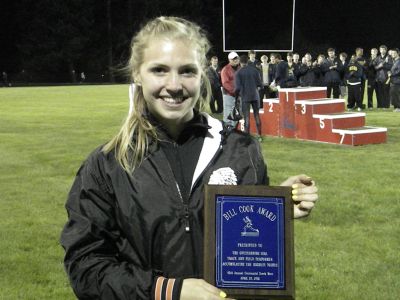