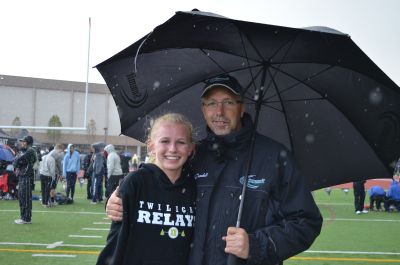 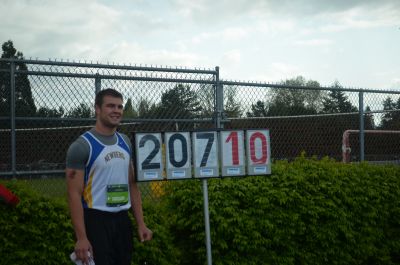 The weather hardly did its part but many of the young athletes surely did at this year’s edition of the Jesuit Relay. Conditions ranged from decent to miserable & including a driving rain at times but, when peruses the results in the future, fans will assume that all was fine.   Cody Danielson of Newberg had his fourth weekend in a row with a heave of the Javelin of over 200.   On Friday he recorded his best mark yet with a throw of 207-10.  Not only did Cody record a national caliber mark but his younger brother claimed second with 170-09.  Andrew Ryan of Silverton place third in the event with 176-02.   The marks in the girls’ Javelin belied the conditions as well, as Makena Schroder of Sandy top the field with 145-00.  Right behind her was Kayleigh Young of Lakeridge, who threw 144-02.  Silverton’s Stephanie Wells took third in 139-08.

The surface was quite slick for anything  extraordinary in the High Jump but Lucinda Howard persevered to win the event with a mark of 5-05.  She was not that far off in her attempt at 5-07, which bodes well for the future.  Second went to Claire Alexander of Jesuit, who cleared 5-04, while Hannah Leatham Sheldon went 5-03.  Bradley Laudbacker of Summit topped the bill for the guys with his mark of 6-06, which gave him a clear edge over his rivals.  Rocky Tufty, the Centennial winner, placed second due to fewer misses at 6-02, while third was determnined by a jump-off between Garrett Hardie of Summit & Mark Shearer of Barlow, who both cleared 6-02.

With apologies to the 1500 guys the event of the event of the day was the girls’ Elite 1500 Meter Run.  This field was just loaded with talent, which the final results bear witness to for sure.  Runners from Washington & Idaho toed the starting line with the best from Oregon and there was no doubt from the sound of the gun, that everyone was serious.  There would be not sit and kick on this day as Amy-Eloise Neale of Glacier Peak went right to the front.  Neale, who has been hampered with an hamstring issue, towed the field through a swift 68 second first lap.  Just off her shoulder followed Alexa Efraimson of Camas, who was coming off of last weekend’s victory at Centennial. Right behind them ran Ashley Maton of Summit & Paige Rice of St. Mary’s Academy, who was followed in turn by Claire DeVoe of Lincoln.   It was a brisk pace yet everyone remained close enough to the lead to still have a reasonable chance of victory.

After two laps in 2:22 Efraimson & Neale remained on point with the original chase pack right behind them.  The next lap slowed a bit to a 74, which was still rather quick, and there was no change at the front.  Maton remained third but was a bit further back, while Alexis Fuller of Union & Emily Nist of Bishop Kelly in Boise moved into contention.  Behind them the field had spread out a bit but a trio from South Eugene (Erin Clark, Sara Tsai & Paige Kouba) worked together in the middle of the field.   During the last lap the race still seemed up for grabs for a time but Alexa Efraimson asserted herself in the stretch to pull away to victory in an excellent time of 4:23.41.  Paige Rice closed well to earn second all by herself in a season best by far for Oregon of 4:25.28 and Amy-Eloise earned third in a fine 4:27.00.  Ashley Maton was right on her shoulder with her third place effort of 4:27.38 and Alexis Fuller was just back with 4:27.42.  Sara Tsai placed sixth in a time that would usually easily win most races of 4:28.  Her team mate Erin Clark was also credited with 4;28 and change, while Emily Nist placed 8th in a brisk 4:29.  Paige Kouba ran a fine 4:31 to take ninth, as Claire DeVoe of Lincoln, Megan Fristoe of Summit and Morgan Anderson of Silverton rounded out the top dozen.  Such was the quality of the race that Sanne Holland of Cheney ran a solid 4:37 yet placed thirteenth in a time that most runners would take and in fact everyone we spoke with ran a personal record.  It was that kind of a race.

It was definitely a hard act to follow but the guys gave a good account of themselves as well.  Like in the girls’ race there was no dawdling with a first lap in 62 seconds.  Beaverton’s Dan Oekerman appeared to be intent on setting the tone for the race but a solid group that included Jackson Darland of Sheldon and Conor McCandless of Gonzaga Prep remained with him through two laps in 2:06.  In the end it was McCandless, who earned the victory in 3:5436, while Oekerman edged Darland for second 3:55.36 to 3:55.38.  The second pack came in only five seconds later led by Jilian Heninger of Lakeridge, Justin Rocereto of Southridge and Neil Siebert of Crater, who were credited with versions of four minutes.  Jean Baptiste Tooley of Central Catholic, David Leavy of Jesuit, Samuel Naffziger of Summit, Fletcher Hazlehurst of Franklin and Brian Eimstad of South Eugene rounded out the top eleven and all had times of 4:01 and change.  It was another race not to miss. 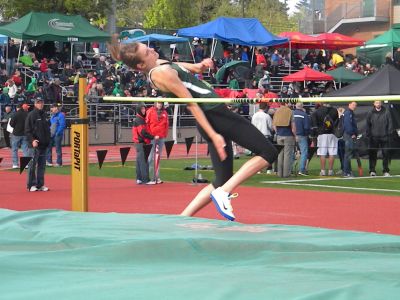 Summit had two representatives in the boys’ 3K and they moved into the lead early in the race and led through the first two laps.  Alex Dufor took the briefly in the middle of the third lap but then gave way to Alldritt, who then cut the pace for the next lap or so of the race.  That duo opened a gap over Matthew Maton, who ran by himself for the next half lap before being joined by Jackson Baker of Franklin, who had a comfortable gap before the next challenger.  For some time Eric had a solid ten meter lead before Dillard closed on the stretch, which proceeded the final circuit.  When Alex made his move he quickly built a lead and from there dominated the final 300 meters and crossed the finish line in 8:43.72.   Matt Maton, only a freshman, closed well to challenge his team mate down the stretch and caught him at the tape to earn second in 8:50.09, which gave him but .05 to spare.   Baker, who had made a run at Maton with 200 Meters to go came in fourth in 8:54, while Reilly Bloomer took fifth place with his clocking of 9:00.  Ryan Jones of Southridge led a parade of runners with his time of 9:07.

The early action in the girls’ 3K saw a fairly large pack remain together for the first two laps with Lindsay Wourms of Camas & Megan Davis of Glacier Peak carrying most of the load pacing. Piper McDonald of Summit was tucked safely in third conserving ground along the inside.  She moved out briefly but then slid back behind the leaders but after about three-and-a-half laps into the race McDonald made a bold move to swing abruptly from the inside in fourth to the outside to get elbow room and quickly assumed the lead.  With that the die had been cast and she stepped up the pace to create a gap, which seemed to widen the rest of the way.  Dylan Hite of Jesuit made an effort to remain in contact for a bit but then soon gave into the seeming inevitable, as Piper glided confidently away for the rest of the race.  With a little more than a lap to go the only question, that seemed to remain, was whether she could improve on the meet record of 10:23.  Without aid it was a formidable task and she fell a bit short, yet still ran an excellent 10:27.50.  Dylan Hite ran an uncontested second in a time of 10:36, while Cyra Carlson of Gonzaga Prep claimed third in 10:44.  Lindsay Worms placed fourth a second later to be followed by Megan Davis.  Chloe Gorman of Lincoln earned sixth with 10:51 nipping Taylor Cherry of Gonzaga Prep.  Megan Napier of Camas, Annalise Miller of Aloha and Marlee Rothschild of Glacier Peak rounded out the top ten.

Not to be overlooked, however, was the fine competition in the Long Jump, which saw  Sierra Arlauskis of Jesuit edge Ashnte Horsley of McMinnville 18-01 to 18-00. 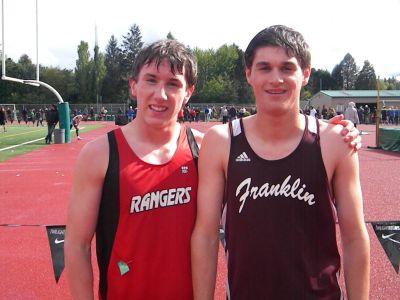