the State meet for the smaller divisions but there were some big marks recorded just the same.  With clear skies and a temperature in the mid-seventies the weather cooperated and Western Oregon track coach Mike Johnson & his staff facilitated the situation by providing efficient hospitality the setting was perfect for a fine day of track and field. 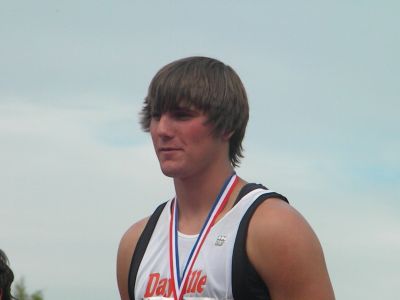 This has been a special spring for the throwing events and yesterday ‘s performances kept up the quality especially in the Javelin but also in the Shot Put.  Justin Larson of Dayville tossed the Javelin 201-08 to claim the 1A title defeating Brady Doty of Prairie City, who threw 191-01.   Shane Brooks of Pleasant Hill scored in 3A with a flight of 199-02.  Ellie Logan of Condon had the best mark of the day for the girls with her 146-04 for Condon in 1A, while Laura Grube of Crow topped the 2A division with 130-08.   Laura also earned victory in the Discus with 122-02.  There were also very noteworthy marks in the Shop Put with Emmi Collier of 3A Warrenton leading the way with 44-10.  She was pressed by Jo-Anne Jessee of Cascade Christian (41-07) & Mellissa Ausman of Nyssa (40-05).    It was Ausman, however, who prevailed in the Discus with 134-06.   A J Hedgecock of Dayton topped the 3A field in the Discus with 158-00, while his team mate Hayden Craig scored in the Shot Put with 50-09.   Jeremiah Wood of Cascade Christian secured 1A titles in both the Shot (51-03) & Discus (1428-09). 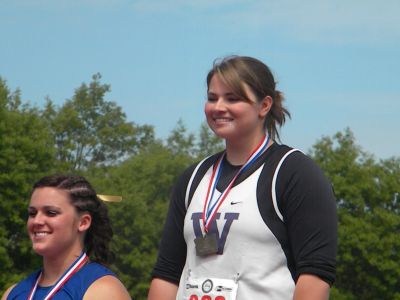 There were some rousing races in the distances with none more exciting than the 1500 Meters for 1A.   Trevor Lane of Southwest Christian took the pace out in 64 seconds but Alex Dillard of Dufur gave chase before taking the lead before the 800M, which was reached in 2:14.  It had to have felt especially brisk for Dillard, who was victorious in Friday’s 3K – run in a swift 8:43.   The third lap was run in 63, yet the duo remained together and they continued to battle down the stretch with Lane getting the nod 4:08.59 to 4:08.79.  Lane came back later in the 800 Meters to earn second (1:59) behind his team mate Nick Martin, who won in 1:57.  Sarah Estabrook of Triad Christian was victorious in the both the 1500, where she topped Kristen Hankins, also from Triad, who ran 5:02, and in the 3K, which she won in 10:51. 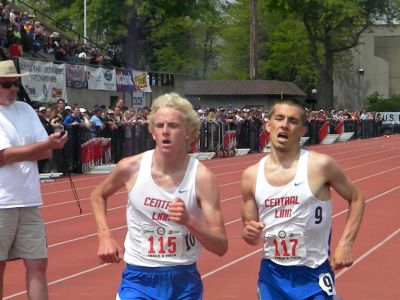 Central Linn had the favorites in both the 3K & the 1500M, where both Zach Holloway & Joseph Ewers scored last year.   Ewers, who claimed his second straight 3K championship in 2A Friday followed his team mate through a first lap of 64.5 and an 800M in 2:11 but it was Ewers, who led at 1200M in 3:16.   The remained together for most of the final lap before Ewers pulled away to win in 4:04 to Holloway’s 4:08.   Katriel O’ Reilly of Union defended her 3K title on Friday improving on last year’s winning time to win in 10:39 and her team mate McKenzie Evans was next in 11:19.  On Saturday she had enough left in the tank to add a 1500M title in 4:55, although Bridget Donohue of Kennedy was close behind in 4:57.  Defending champion Hannah Jossi of Portland Christian earned third in 5:12.  Both Donahue and Jossi returned in the 800M with the Kennedy runner victorious again.  Her time of 2:25 gave her a two second margin over her rival, while Zoe Engwall of East Linn Christian placed third in 2:28.

Nick Obletz of Oregon Episcopal is a much improved runner as a junior this year and on Saturday he double back after his triumph Friday in the 3K (9:02).   If he was tired it was certainly hard to tell, because he took the lead early and held it for the better part of the race.  The first lap went in 68 and, although it appeared at first, that he might have an easy victory but Hudson Eustace of Cascade Christian proved that he had other ideas.  With 250 meters to go Hudson stormed into the lead on the back-stretch.   Obletz decided, that this was just “adversity he’d have to deal with” regrouped to retake the lead in the final straight and won with a time of 4:05.10.  Eustace, who had won the 3K at State in 2011, was a close second in 4:06.04 and Corbin Helt of Creswell placed third in 4:07 edging Joe Carrillo of Chemawa, who was also credited with 4:07 & change.  Ryan Maag of Nyssa garnered fifth in 4:08.   Sarah Bennion of St. Mary’s battled 3K champion Olivia Powell of Creswell in the 1500 and came away with the victory in a time of 4:59, as Powell ran 5:03.  Madison Winn of Burns & Vivian Vanover of Creswell earned third & fourth in 5:05.   Bennion came back to lead after a lap in the 800M in 69 on her way to a victory in 2:18.44.   Mackenzee Cleveland of Valley Catholic ran 2:22 to take second with Winn adding a third in 2:23.

Sarah Bennion, who won both the 1500 Meters & the 800M was a triple winner, who also managed to score in the 300 meter Hurdles with a time of 46.06. Hers was a rather unique multiple combination but the meet proved a very busy and successful one for a number of athletes including Kristan Holding of Damascus Christian, who scored in four 1A events. Kristan scored in both hurdle events (15.90) & (47-01). In the Field Holding added a victory in the Long Jump (17-06) and then trumped the competition in the High Jump with 5-05. Ellie Logan of Condon-Wheeler fared almost as well with victories in the Javelin (146-04) and Triple Jump (34-09) plus the 200 Meter Dash, which she won in 26.37. She placed second in the 100M with 12.88 for a very full 1A State experience.

At the 3A level Mariah Morton of Catlin Gable contributed to her team's victory in the 1600 Meter Relay by running the third leg in that event. She won on her own in both the Long Jump with 18-00 and the Triple Jump in 36-01. Dayton 's A J Hedgecock was a one-man scoring machine earning victories in the 100 Meters in 11.22 (Marcellus Ramos of Nyssa was second there incidentally), the Discus (158-00) and the Long Jump (21-11) plus a second in the Triple Jump (43-01) behind Ramos, who managed 43-08. Still the overall depth of Nyssa prevailed in the team scoring 73 to 63.

Mark LaCoste of Central Linn contributed to his team’s State tile earning victories in both the  hurdles events:  the High Hurdles in 15.00 & the 300H in 42.56.  He was also a part of the victorious 400 Meter Relay.   Note to be overlooked is Cole Hoberg of Prairie City, whose 6-07 in the High Jump was of special quality and the best in all divisions.  He also added an eighth place effort in the 100 Hurdles. 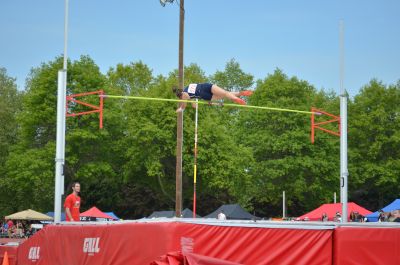 While the goal of every athlete is to first get to State and then perform their best, there are times, when the triumph occurs off the field. Hudson Eustace, mentioned earlier for his second place effort in the 1500 Meter Run, was also entered in the 800 meters, which was held near the end of the day. In the cacophony of action, which can be a part of track & field Hudson inadvertently ran in the wrong section of the two-lap event thereby being disqualified. Given all the hard work and sacrifice, which goes into simply qualifying one can imagine the pure anguish, which Hudson must have felt. Sadly no one noticed the error until after the race had been run.  There was an understandable brief moment of tears but Hudson recovered quickly. it would not have been  surprising to hear angry words, possibly foul expletives, excuses or blame but none of that was forthcoming from Eustace, who is a special young man. We spoke with him right after the decision to DQ had been made to give a word of encouragement & condolence and it was at that time, when one of the race officials came up to offer his words of respect for Hudson 's handling of the affair. He noted that "it spoke well of him as a person", which it surely did. Hudson had already moved beyond that moment to his goals in the future. As a sporting event there was much to cheer during the course of the day, yet the thing that will remain seared in my memory was Hudson 's grace during a most unfortunate situation. Our sport has some wonderful individuals, who are a pleasure to know just a bit and young Hudson Eustace is a fine example. 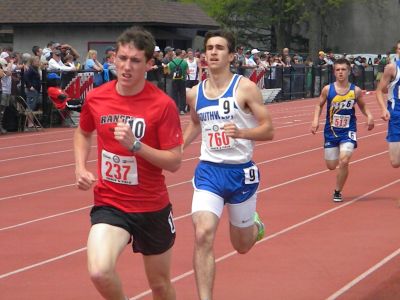