It came down to a late kick in the guys’ Elite race between Julian Heninger and Kyle Thompson of Central Catholic and it was the Lakeridge senior, who surprised the junior, who is the defending State large –school champion.    The inning time of 9:03 for the two mile layout gave Heninger a two second victory over Thompson as well as the best time of the day.   Nick Obletz of Oregon Episcopal School earned third in a close battle with Jackson Packham of Franklin and Adrian Hinkle of Cleveland.   Lincoln runners Tanner Smith & Nico Banks earned sixth & seventh respectively and were followed by Christopher Black of Franklin.   Ty James of the host school ran 9:17, which was good for eight and Connor Cushman of West Linn of West Linn rounded out the top ten.

The girls had the option of an elite race but Paige Rice of St. Mary’s Academy and Piper Donaghu of Grant made the junior race special by blasting away to a private duel, which was resulted in the best times of the day for female runners.   Rice, the defending 6A champion, won with a brisk time of 10:13.   Donaghu ’s fine time of 10:18 for second would have easily won in any other division.  Charlotte Corless of Sunset garnered third honors with 10:31 and Samantha Michaelson of Lincoln ran 11:03, which was good for fourth. 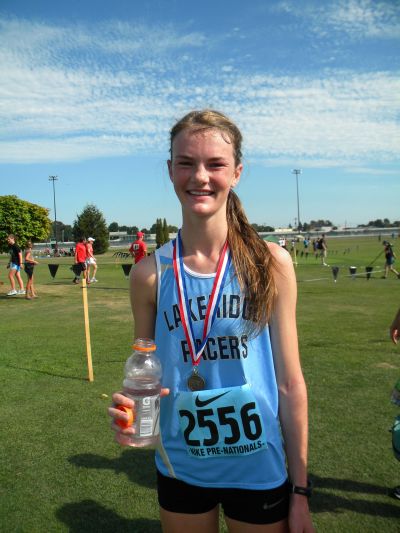 Lakeridge senior Kelly O’Neill has already had a fine career with three trips to State & she started her final fall campaign with a convincing victory in the elite race.  Her winning time of 10:51 gave her a six second margin over Tess Michaelson of Lincoln.  Taryn Rawlings of Wilsonville added a third place effort to give the home crowd something to cheer about as she finished in eleven minutes even & Sasha Gonzalez of Milwaukie improved her PR in the two mile by over forty seconds with her 4th place effort  of 11:06.  Tia Carnahan of Scappoose took sixth in 11:27 and Macie Gale of Thurston followed in seventh with 11:32.   Becca Pearson of Lincoln & Elizabeth Dean of Tigard with credited with the same time of 11:34 and West Linn team mates Rebecca Donnelly (11:45)& Leah Henningsen (11:47)secured ninth & tenth for the Lions. Elena Torry-Schrag of Forest Grove came in eleventh with 11:47.

Parkes Kendrick of Grant secured the laurels in the senior division with her time of 10:42, as Ellen Patterson of SMA took second with 11:50.  Sunset’s Sarah Fahmy followed with a third place finish in 10:56 but Aloha runners showed their promise for this season, as their runners Amanda Stowe (11:18), Desyre Blackburn (11:20) & Kathleen Nesbit (11:30) earned 4th, 5th & 7th respectively.  St. Mary’s runner Celeste Raymond broke up the trio with her sixth place clocking of 11:30.

We had been warned to watch out for precocious freshman Ella Donaghu of Grant and she supported the claim with her victory in the race for ninth grade girls with 11:25.  Nicole Griffiths of Sunset placed second in 10:58 and SMA runners Lacey Conner & Kate Patterson added third & fourth.   Maddie Fuhrman of Silverton was fifth in 11:22 and Sharon Zhang of Sunset finished alone with 11:33.  Paige Nelson of Thurston round out the top seven with her mark of 11:42.

Emma Wren of Cleveland was pursued by a trio of St. Mary’s runners but she prevailed with her first place clocking of 11:24.   Lucy O’ Sullivan, Molly McCullough & Abby Diess swept the next three places before Lauren Stockley of Kennedy ran 11:59 for fifth.   McKenzie Hutchinson of Lincoln had twelve flat, as she crossed the line in sixth place.

Last fall Central Catholic had a formidable group of freshman boys’ and they proved that they can dominate as sophomores as well as they commandeered five of the top seven places in the sophomore division.   Topping that field was Jean Baptiste Tooley, who ran 9:35.  Roba Sultessa of Cleveland broke up the group with his second place effort of 9:47 but the Ram runners Sam Truax (9:53), Gunnar Vik (9:53) & Sam Lomax (9:54) ran in essentially together.   Mark Sussman of Sunset managed sixth with 10:01 but then Harry Stewart of CC added a seventh with 10:03.

Half a decade ago West Linn previewed a solid class of runners, who made waves for four years led by Cullen Wannarka & Taylor West and they previewed another strong group at Wilsonville on Friday.  Colin Squires led the division with 9:35 edging Leo Lukens of Lakeridge by a second.   Central Catholic also has a group to watch, which was led by Zack Lavier, Daniel Thompson, yes another Thompson, & Jackson Frank (yet another name which ought to have a familiar ring to it), who ran 9:43, 9:46 & 9:51.

David Sellers of Aloha nipped Dante Della Gasperina of Central Catholic by a second with his time of 9:28.   Giapoujay Garmondeh of Aloha edged Grayson Munn of Crook County by a second with his mark of 9:37 and Trevor Lane of Southwest Christian came in fifth.    Ethan Livermore of Cleveland & Jack Roberts of Grant went 1 – 2 in the senior race for boys and were separated by a second with the best time being 9:30.  Grant also received a third place effort from   Aidan Paulk, who chipped in 9:34.  Morgan Coxen of Silverton ran 9:35 for  fourth &  Pake Benthin of Molalla entered the chute a second after him for fifth. 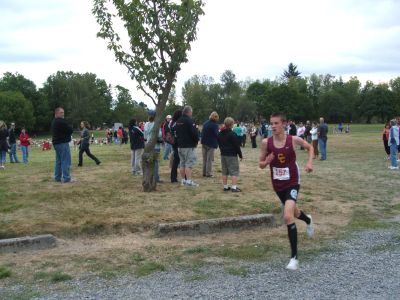