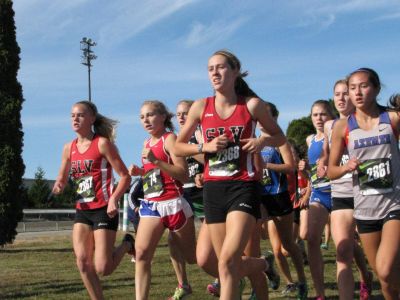 Portland Meadows was the sight of the Danner races, which were the main features of the Nike Pre-National meet and Anna Maxwell of California’s San Lorenzo Valley returned the favor from Stanford by dominating the girls’ race.   A fairly large pack stayed with the Foot Locker National finalist early including Paige Rice of St. Mary’s Academy and Jordan McPhee of Mt. Rainier.   Always in the hunt, as well, were South Eugene’s pair of Sara Tsai & Erin Clark.   The mile was reached in 5:38 with little change but Maxwell opened a gap prior to the two mile mark, which was passed in 11:25.   McPhee, another Foot Locker finalist, remained in contact but did not appear sharp – probably because this was only her second test and her main focus is basketball, but she, like Rice, yielded ground late.    Maxwell went through the 4K in 14:11 and by that time she held and eight second margin over Clark & Tsai, while McPhee came through in 14:28.  Others still in the hunt were Paige Rice, who hit the 4k in 14:37 and Chandler Olson of Woodinville, who notched 14:48.   Although Tsai pulled away late from Clark and even picked up a bit down the stretch, Maxwell was not to be denied and she cruised across the line in 17:37.  Tsai came in six seconds later and Erin Clark followed in third with 17:46.  Grant freshman Ella Donaghu earned 4th in 17:52 and Maggie Schmaedick of Sheldon was a strong fifth with 17:56.  Jordan McPhee faded but held off Sunset’s Charlotte Corless with both being credited with 18:11.  Nicole Griffiths, also from Sunset, was 8th in 18:12 and Lindsey Bradley of Richland took ninth in 18:18.  The valiant Rice was tenth with 18:19 and Parkes Kendrick of Grant was eleventh with 18:20.   Piper Donaghu of Grant ran 18:32 for 12th to finish a second ahead of MaryKate McGuire of Dallas.   Sehome ’s Emily Pittis (18:34) finished 14th with 18:34 and Chandler Olson was 15th in 18:36.   Paige Dilmore of Rocky Mountain secured 17th and had the honor of being the top female from Idaho. 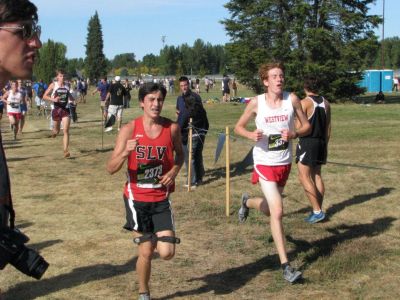 Boys action (thanks to Jeff Maxwell)

In the guys’ race a pack of four, which included Wolfgang Beck of Gig harbor, Elijah Armstrong of Pocatello, Jackson Darland of Sheldon and Mark Tedder of Battle Ground, went through the mile in 4:55.  By the 2K in 6:09 the lead pack was five runners with a second pack of four or so another five to seven meters back.   Idaho sophomore Elijah Greer handled the pacing duties during the middle part of the race but was joined by Beck around the two mile mark, which was reached in 9:56.  Beck drew away about a half mile late and went to a comfortable victory in 15:16.   Armstrong, who had an off day last weekend at the Firman Meet placing sixth (such are his off-days it seems), followed along in second in 15:28.  Mark Tedder appeared to have third place until Jackson Darland swept by late to nip him for third with both being credited with 15:30.   Nathan Wadhwani from British Columbia’s Terry Fox, secured fifth in 15:41 and was followed a second later by Beaverton’s Dan Oekerman.   Nick Obletz of Oregon Episcopal continues that he can compete with runners from much larger schools by taking seventh in 17:43 and Jonathan Stevens of Redmond edged Jose Macias of Hermiston with both getting 15:44.   Tenth went to Sehome ’s Conner Johnson, who ran 15:47, as he finished two seconds ahead of Justin Ross of Rocky Mountain, who in turn held a three second advantage over defending 6A Oregon champion Kyle Thompson of Central Catholic.  Drew Schreiber of Eisenhower garnered 13th with 15:54 and was followed by Reed Henderson of Sehome & Isaac Stinchfield of Washougal.  Colby Gilbert ran 15:58 to make it four Washington runners in a row and then Eduardo Juarez placed 17th for Hermiston.  Tristan Peloquin added an 18th place finish for Gig Harbor.  Kevin Mathews and David Cornish rounded out the top twenty.

In other girls’ races Cassie McKinney of Union ran 18:54 and Taryn Rawlings of Wilsonville was second in 19:05.   Hazel Carr of The Northwest School in Seattle scored in the Division II race with 18:59, while Skyview’s Sara Tafere was fifth in 20:03.

In the aftermath of the races it should be noted that the course on which the runners trod on Saturday will have little in common with what they’ll find come December.  Be advised the mud will be more than just oozing and in fact has been so bad, that two former reporters came dressed in gear more appropriate for fly fishing.   Happily this one almost never wears pants or socks, so the damage for me was minimal.   On a more serious side Anna Maxwell had been dealing with a cold even prior to the race and was not at full strength, yet she was most impressive.   Two of her team mates were also a bit sick.   Just wait until they are all healthy.