Jordan Hasay of the University of Oregon finished third as an individual but had the satisfaction of leading her Duck squad members to the team victory.  Although the Providence College team had been told that had secured the victory and promptly celebrated, it was the Ducks, who prevailed 114 to 183.  Stanford followed in third with 198, while the Huskies of Washington came in ninth with 334 points.

In the men’s team race Oklahoma claimed the laurels with a low 72 points.   Included on the OSU team was former Washington prep Shane Moskowitz, who finished 53rd for the Cowboys.   Wisconsin (135) & Colorado (158) earned second & third, while Oregon had a rough day placing only twentieth.  Trevor Dunbar led the Ducks with his 41st place effort. 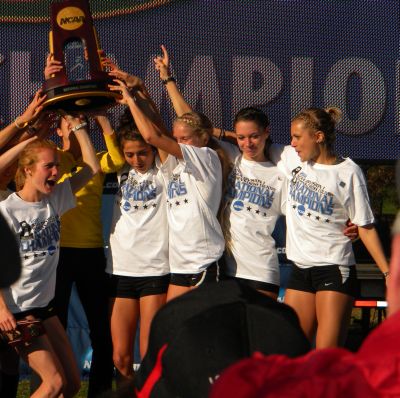 The women’s race was the first event on the card and the leaders rolled through the first mile in a time of 5:01.  The course has some undulation but nothing, that would truly impede the harriers and in spite of the pace there was a large group at or near the lead.   More to the point there was no real separation from the so-called chase pack, which was more like a throng, for it certainly was not strung out in a line.   The lead group included Betsy Saina of Iowa State, Abbey D’ Augustino of Dartmouth & Aliphin Tuliamuk-Bolton with Jordan Hasay one of a small legion not far from the leaders.

It was not until around the 4K mark that the bulk of the runners fell by the wayside.   In that group was Laura Hollander of Cal Poly as well as the afore-mentioned runners plus Risper Kimayo of UTEP.   That said it was usually the African contingent, which was setting the pace.   As with all races the pace gradually began to take its toll and by the three mile mark, which was reached in 15:54 the leader group had been whittled to just three runners with Hollander remaining in contention just a bit further back.  She in point of fact was able to make it a foursome by the 16:26 mark.

It was not to last, however, and the remainder of the race would become a three-way battle.   Before reaching the large tree, which acted as the final turn in the course before the long finishing straight, there was little to differentiate the runners.   Fans listened to the announcer describe the early action, while the runners were still too far away to see but, when the trio did come into focus, it was clear there was little separating them in more ways than just distance.  Saina had a bit more left in the final fifty meters and edged ahead to earn the victory in course record time of 19:27  D’ Augustino  opened a slight gap with ten meters to go but Jordan Hasay reeled her back in but not quite in time to garner second place, yet both were credited with the time of 19:28.6.

Aliphin of Wichita State placed fourth five seconds later & was followed by Risper Kimaiyo, who ran 19:41.  The home crowd got an added thrill when Kentucky ‘s Cally Macumber entered the chute sixth with 19:42.  Seventh went to Mareike Schrulle of Iowa in 19:43.3 and Oregon transfer Alexi Pappas followed less than a second later.  Laura Hollander placed ninth in 19:45 and Sarah Collins of Providence took tenth in 19:50.  Violah Lagat of Florida State finished just ahead of her team mate Colleen Quigley, who ran 15:43. 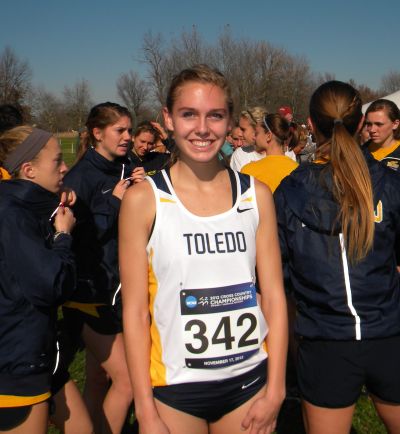 For over a decade we have been proclaiming that the Northwest was producing many quality runners and that was in evidence this day with former Crater runner Kayleigh Tyerman earning 82nd (20:39) and Skyview harrier Priscilla Timmons taking 102nd with 20:49 despite battling a cold all week.  Finishing ear them incidentally were University of Washington runners Lindsay Flanagan (20:36), Justine Johnson (20:43) & Katie Flood (20:43).   For the record Oregon’s Lacey Oeding finished in 20:31 & Sarah Penney finished in 20:50.  Other northwest runners of note included former Washington prep Devin McMahon (20:56), Annamarie Maag, formerly of Jesuit (21:05), Maddie Meyers of The Northwest School (21:26),  Kayla Evans of Bellarmine Prep (21:32) and South Eugene’s Paige Kouba (22:52).   To say the least the Northwest was well-represented just on the distaff side of show. 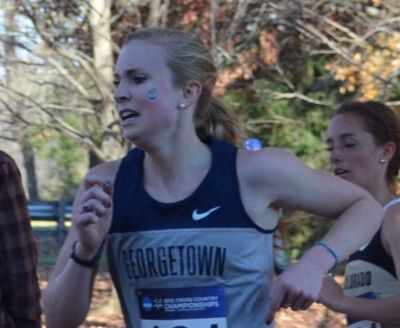 Despite a brisk pace a huge group of runners remained together for over two miles, which they reached in 9:32.   In the early going Oregon stalwarts Trevor Dunbar & Parker Stinson raced about ten meters back of a phalanx of African runners and appeared to be running comfortably.  That did not last much longer, however, as they and numerous others were relegated to a secondary role.   That said there was little change in the make-up of the lead pack until they reached the 4K in 11:25.

It was at that point, when the race appeared to begin in earnest.   NAIA champion Kennedy Kithuka of Texas Tech and Stephen Sambu & Lawi Lalang of Arizona began throwing surges at each other and began to take control of the race.   The trio did not create a gap over Anthony Rotich UTEP, Girma Mecheso of Oklahoma State and Henry Lelei of Texas A & M, who responded in response for about two minutes but by the 13:43 mark in the race there was only a trio, who could vie for the individual championship.

Less than a minute later (14:30) Lalang fell off the pace, so that it would come down to just two runners.   Still it was rather stunning to realize that even at that point the next closest pursuer was almost a half minute further back.   Although the crowd anticipated another roaring finish down the final stretch it was not to be and Kithuka sped away from his rival to earn a victory in a time of 28:31.   It is hard to make a comparison as far as time, because Tom Sawyer Park is hardly challenging and, although it did play host to both the Greater Louisville Classic & the pre-NCAA meet earlier this year, it is hardly a well-used venue. 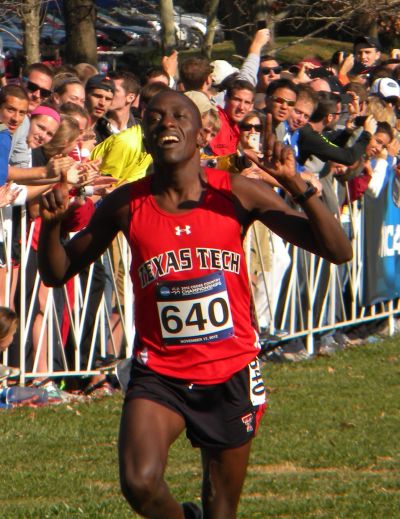 Sambu finished second in 28:38 & his Arizona team mate followed in third with 28:51.  Anthony Rotich was a distant fourth with 29:13 and Girma Mecheso earned a crucial fifth for Oklahoma State, which claimed the team title with a low of 72 points.   Henry Lelei took sixth in 29:14 & David Rooney of McNeese State followed in 7th (29:21).   Wisconsin placed second in the team race & was led by the 8th place finish of Mohammed Ahmed, who ran 29:23 and he was followed by OSU runner Tom Farrell (29:26).   Crossing the line in tenth was Paul Chelimo of UNC-Greensboro.   Wisconsin managed 11th & 12th place finishes by maverick Darling (29:30) and Reed Connor (29:31).   Former Duck Brian Shrader, now running for Northern Arizona, had a fine race placing 15th and another old Foot Locker friend, Wade Meddles, had his own running renaissance for Eastern Kentucky with his 38th place finish in 29:59.  Trevor Dunbar was the first Oregon finisher with his 41st place mark of 30:04.

As was the case with the girls’ race there were a number of former northwest preps representing their region as well as their college and leading the way was Shane Moskowitz, who ran 30:22.  The former Central Kitsap star provided a valuable contribution to the Oklahoma State victory.    Joey Bywater ran for Washington & the former NW prep was the only Husky in the race placing 69th in 30:30.  Nathan Weitz, formerly of Shadle Park, aided the Northern Arizona cause placing 80th with 30:35.  He had only a slight lead over Connor Peloquin (84th – 30:36).  Oregon runner matt Melancon, once from Sheldon, finished  97th in 30:41.   Other former northwest standouts included Miles Unterreiner (Stanford by way of Gig Harbor- 31:03), Jacob Smith (Portland by way of Wenatchee – 31:06) 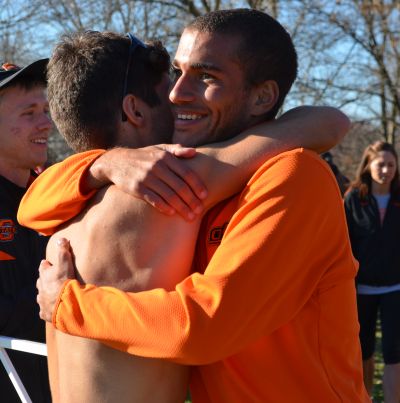