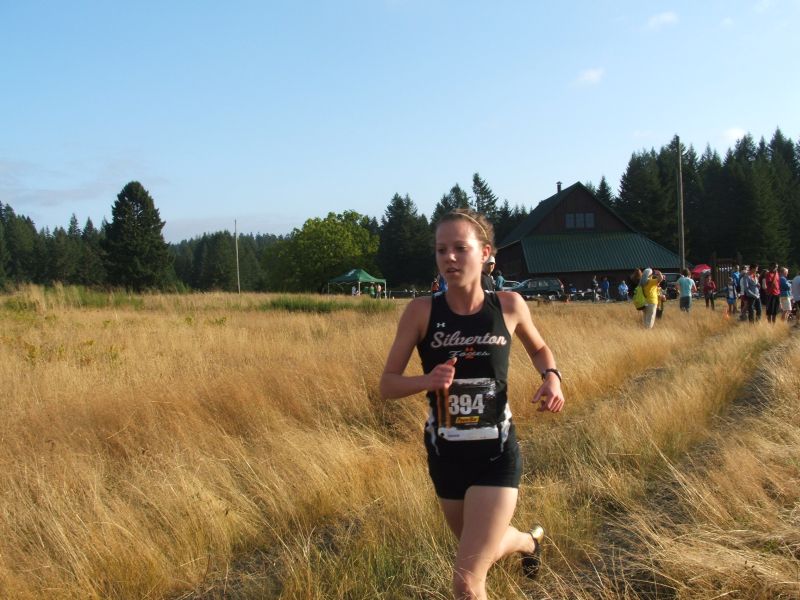 The Silver Falls Invitational has been a part of the Oregon Cross Country scene for many years and 2011 marked its 41st edition.  Numerous runners of note have challenged the course but few have rung up times breaking twenty minutes for the guys or 24 minutes for the girls.   Billy Harper of Junction City had by far the best effort on the course in his senior campaign, when he ran an astounding 18:39, while Hayley Belli of Philomath remains the only girl to have broken 23 minutes.  The course measures 5.2 kilometers and features a noteworthy hill, they call “the Monster”, which must be conquered twice in the race, so the course has its own mystique & aura.

On Wednesday no records may have been broken but there were a number of times recorded, which will make the all-time race list.  It should be noted that the course these days is a bit easier than in former days, because the extreme rocks have been covered over but that notwithstanding the challenge is not that much more facile, so the achievements today are truly noteworthy.

The guys’ race saw Zachary Holloway of Central Linn take the pace out early and after half a mile only two runners, Mark Stephens of Crescent Valley & Kody Osborne of East Linn Christian, remained within five yards.   Zach reached the mile mark in 5:19 and already had the race well in hand.  The course is somewhat of a figure-eight with two basic loops being run in opposite directions after a start that is basically run almost perpendicularly for a brief time.

By the time that he began the second loop at the 7:50 the only suspense would be whether he could break twenty minutes. That question was not even answered after he rounded the last turn and began the last hundred or so meters towards the finish.  His final time was an impressive 19:58 and must rank near the top of the charts.  I have not been able to gather records from the ‘90s but in the last decade only Matt Auer, Max Long & Sean Coleman have been able to do better.  Even Brad Taylor of Oakridge, who was of Foot Locker quality, could not break into the nineteen’s (20:06).   It bodes well for the 3A runner, who hopes to challenge for a state title – certainly he has no fear of hills.

Mark Stephens of Crescent Valley came in second in a time of 20:24 and for the record I am aware of only three other runners, who could top that.  Kody Osborne, only a junior, placed third only four seconds behind him and Adam Siltala of Clatskanie placed fourth in 20:30.   Rounding out the top ten were Nick Martin of Southwest Christian (20:38), Adam Bird of Dallas (20:39), Joseph Ewers of Central Linn (20:49), Boone McCoy-Crisp of Philomath (21:01), Sspencer Barrett of CV (21:06) and Zach Trask of Philomath (21:16).

Morgan Anderson of the host  team won the race last year and she got off to a fine start this campaign (2nd in her division at Wilsonville and 2nd at the Chapman Invitational), so she was the natural pick, if one were going to place a bet.   Morgan noted that she likes to get out well in a race and she achieved her goal again today by boldly moving out from the start of the race.   She reached the mile mark in 6:20 and by the time she began to head up the hill for the second loop, Morgan was in firm control of the race.  Her final time of 23:58 was almost a minute ahead of her closest pursuer and as far as I can tell is fifth fastest time on the course & Hayley Belli holds two of them.

Eliza Smith of Blanchet placed second with 24:52 and Aiyanna Cameron-Lewis of Crescent Valley placed third with 25:05.   Sarah Sherman of McKenzie earned fourth with a 25:17 clocking, while Meredith Wells of Crescent Valley came from well back in the pack to claim fifth 25:32.   Rebecca Anna of Southwest Christian took sixth (25:46) & Kenzie Collins of East Linn Christian garnered seventh with 25:56.  Rounding out the top ten were Katie Bryan of Crescent Valley, McKenzie Spooner of Catlin Gable & Sequoia Rysdam of Silverton, who placed 7th through 10th respectively.

The meet held every year in scenic Silver Falls State Park is often referred to as the Oktoberfest Invitational, because it usually coincides with the Oktoberfest celebration held nearby in Mount Angel.  Given the times and where they stand on the all-time meet list there are numerous runners, who have cause for celebration.