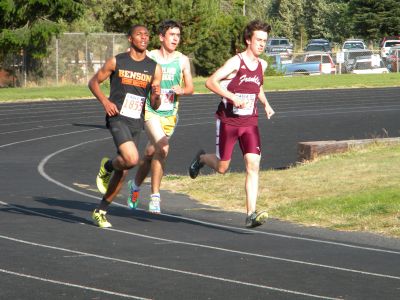 Pleasant temperatures and blue skies greeted runners offering a very nice view of Mt. Adams in the distance but the tantalizing aspect of the meet was, that it offered another opportunity to match 5A powers Franklin & Hermiston.    Hermiston soundly defeated to Franklin at the Brooks Runners Soul Invitational last Saturday & in theory the two squads were going to go at it once again on Friday.

That idea quickly went out the window, when the runners returned to the track after a brief sojourn on the grass.   At the front of the pack were Jackson Baker, no surprise there, Fletcher Hazelhurst  &  Jackson Packham of Franklin along with Christopher & Adrian Hinkle of Cleveland plus Alex Dillard of the Dalles.   To see the Hermiston team one had to look well behind the lead pack to see the five Hermiston runners massed as a pack and that was exactly the plan to run together for a time.

Although the plan made sense to get the quad together as a running group, it altered the nature of the race.   Soon Jackson Baker was on his lone well out front of any challengers, which meant he would receive no help in pushing the pace.   It was only about half way into the race or 3K that the top four Bull Dog runners were unleashed, which probably was a rather depressing sight for some of those unsuspecting harriers, who remained well ahead of them at that point.  Soon the four began passing runners in the white uniforms, which probably made more than a few runners feeling as if they were being engulfed by a white sea of foaming surf

In the end Baker rolled in alone in a time of sixteen minutes flat, which was the second best time ever on the course behind Leo Castillo of Hood River in 2007.    Christopher Hinkle followed fourteen seconds later and Alejandro Cisneros of Hermiston took third.    Fletcher Hazelhurst claimed fourth in 16:30 and was followed by Alex Dillard, who ran 16:31.   Hermiston’s Eduardo Juarez and Javier Velasco earned 6th & 7th respectively, while Adrian Hinkle came home eighth.   Jose Macias placed ninth in 16:46 & Gabriel Packham of Wilson garnered tenth in 16:51.  Jackson Packham secured eleventh for Franklin in 16:57 – six seconds in front of his team mate Josh Edel.   Kain Garcia ran 17:11 to place 14th for Hermiston.

Given Hermiston’s approach to the race it is hard to make too much out of the final score but for Franklin the result had to be encouraging, for, although the lost once again, they had narrowed the gap to  39 – 45.   Cleveland secured third with 67 points.    The girls’ team scoring showed Hermiston winning with a low of 42 points, which was nine better than Cleveland.  Franklin, which ran without its top runner, was a distant third with 107 points.

The girls’ individual results came as somewhat of a surprise, when Maggie Coleman of Hermiston ran 19:27 to claim the victory.  Placing second was Katie Markwick, also from Hermiston, who had placed second last Saturday in the Brooks meet.   Mona Law of Franklin followed in third with 20:20 and Cleveland runners Emma Wren & Kelli Rollins took fourth & fifth respectively.   Kelli Niederwerfer of Hermiston came home in sixth (21:19) and Fiona Wylde of Hood River edged her team mate Jessica DeHart by a second with her 21:25 clocking.   Maddie Wood of the Dalles earned ninth & Hermiston’s Zoey Garcia finished tenth with 21:46.  Chloe Retallack of Franklin garnered eleventh with 22:01.     Of note also was the JV victory of Althea Dillon, who ran 22:23 and would have placed tied for sixteenth in the varsity race, where she appears to be headed in her next race.   Dane Hilts of Franklin scored in the boys’ JV race with 17:52. 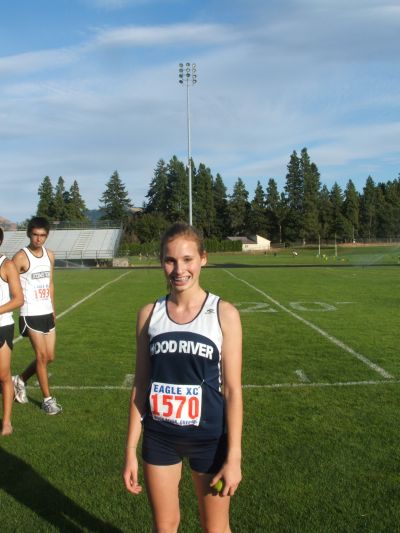