After five days of seemingly incessant rain in the Willamette Valley, it was a pleasant respite to see some blue skies after cresting the Santiam Pass and heading to the eastern side of the Cascades.  By the time runners toed the line in Bend there were even fewer clouds and a cool, yet a cool but pleasant temperature.   The only negative weather-wise was a stiff wind, which kicked up shortly before the Elite Girls’ 5K, which had to affect various parts of the race. 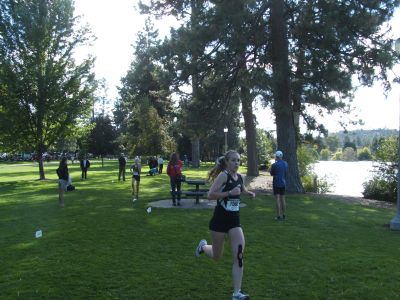 Wind and all the start of the race saw Piper McDonald, Summit’s impressive freshman runner, taking an immediate lead.  About four meters back followed a small pack that consisted of Megan Fristoe & Ashley Maton of Summit plus Morgan Anderson of Silververton.   Jenna Mattox of Bend and Kira Kelly of Summit led a phalanx of runners giving chase.  They race down the length of Drake Park not far from the side of the road and rounded a sweeping turn near Tumalo Street and then began to wind their way along the side of the Deschutes River back past the start.   By the time that they reached that point the top four runners were running essentially together, while Jenna Mattox & Kira Kelly ran in a distinct second pack, which included Lauren Morgan and Carmen Mejia of South Medford.

It was about at the 6:27 mark in the race, when the course crosses a pedestrian bridge for about a half-mile circuit on the  western side of the river and, when they returned to the main portion of the course Megan Fristoe had edged ahead to take a short lead.   From there the runners head to the north side of the park, where they encounter a mild hill.   While out of sight of most fans the Summit star took over control of the race leaving Piper McDonald alone in second.   Further back Morgan Anderson waged a private battle with Ashley Maton and for the moment took a short lead.

Megan, as well as a fair number of us, was disappointed that she was unable to run a head to-head battle with Alisha Luna of Klamath Falls.  It should have been a match between the defending State champions in the 4A & 5A divisions but Luna & her team ran in the other varsity race.  Not only that but South Eugene did not bring their top runners, which included Erin Clark & Sara Tsai, so the field was weaker than had been anticipated.    Also a shame was the absence of Mountain View, Idaho, which was entered but failed to show.  That resulted in the absence of Samantha McKinnon & Jordan Mathes, who ran so well at Danner.  Despite that set-back Megan ran a very solid race and came home in an impressive 18:12 in only her second race of the season.   Piper McDonald ran the second half of the race on her own and came in with a fine time of 18:23.  Both Megan and Piper backed up their previous times at the Harrier Classic in Albany with slid times on this slower course.

There are often times, when the lead runners draw attention away from other portions of the race and that sometimes is a shame, because there is always much going on with-in the overall framework of the race.  An excellent example of this is the race within a race between Ashley Maton & Morgan Anderson.   The pair returned to the area near the start at the 10:25 mark in the race, where Maton passed Anderson to seemingly take control of third place.    That was an illusion, because Morgan, who earlier won the Silver Falls Invitational, moved back into third prior to re-crossing the river.   Maton battled back on the far side of the river they went back 7 forth again but once they had returned and headed for the hill Ashley opened up a gap of five to ten meters.   As the pair headed back down the hill to the finish line Ashley made a surge, which barely caught Morgan at the line.  Still it was a fine duel worthy of a champion, which they both are in their own right.  Their final times were 18:54.9 & 18:55.4 respectively.

Jenna Mattox opened up a gap in the later stages of the race to take fifth in 19:20, while Kira Kelly finished in 19:23.    Laura Morgan came home seventh in 19:25 nine seconds in front of her South Medford team mate Carmen Mejia.      Tess Nelson of Summit finished in 19:47 to secure ninth, while Stefanee Tolner of South Medford & Melissa Hubler of Bend garnered tenth & eleventh.   The team scoring  saw Summit dominate by a 21  to 51 margin over South Medford and this was in spite of racing without Sara Fristoe, who was suffering the effects of a cold or flu & it is of note for those, who always seem over-concerned with the rankings.   Bend placed third with 83 points to top Mountain View. 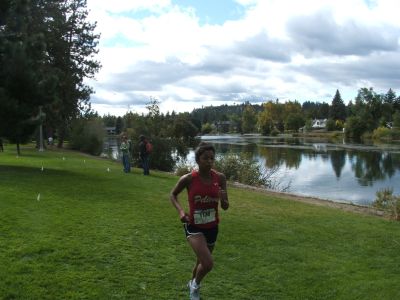 Alisha Luna of Klamath Union set the tone early in the other girls’ race by blasting away early and turning in a dominating performance.   Her time of 18:32 created a fifteen second margin of victory over Julia Taylor of Capital (Idaho).    Savana Schilling, also from Capital, claimed third in 19:55and was followed by Borah’s Mackenzie Carruthers, who was clocked in 20:07.  This was a PR for the runner, who has shown a marked improvement since the onset of the season.   Nevina Deluca of Phoenix came home in 20:23, which was good for fifth, as the Phoenix runner finished nine seconds ahead of Summit’s Olivia Moehl, who placed sixth.    The team scoring saw Klamath Union take the title with a low of 51 points with the aid of Bailey Pimentel & Christina Tyson, who placed eighth and ninth.  Summit was not far  with 60 points and  their Hadley Schoderbek added a tenth place finish.   Capital & Bora placed third & fourth with 70 & 145 points respectively.

Travis Neuman of Summit had a very big day the previous Saturday at the Harrier Classic, when he zipped home in 15:06.   Friday’s effort on a slower course shows that he junior runner is really coming into his own.  He and team mate Eric Alldritt broke away early and only Cascade Christian’s Hudson Eustace made an attempt to cover the move.    The Summit duo crossed to the other side of the river at the 5:06 mark and by the time that the leaders returned the race already had established its lead pecking order.   Travis ran well alone in first to come home with a fine time of 15:20.   Eric Alldritt ran 15:58 and was the only other runner to break sixteen minutes.    Hudson Eustace displayed a fine return to form after some earlier training issues to just miss with his 16:05 clocking, which was good for third. 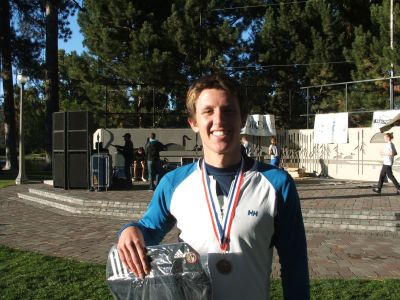 South Medford’s Travis Jantzer and Summit’s Luke Hintz waged a battle for fourth, which lasted until the finish line, where Jantzer got the nod, as both were credited with versions of 16:30.   Matthew Maton of Summit was not far behind with his sixth place effort of 16:33.   Mark Stephens of Crescent Valley was right on his tail four-tenths of a second later, while Jake McDonald of mount View (Or.) placed 8th in 16:43.   Alex Stevens of Redmond added a ninth place effort (16:45) & Riley Anheluk of MV garnered tenth.  Camden Stemple led a trio of South Medford runners with his eleventh place finish in 16:52.   Summit claimed the boys’ title with a low of 28 points to top South Medford’s 59.  Mountain View took third with 72 points. 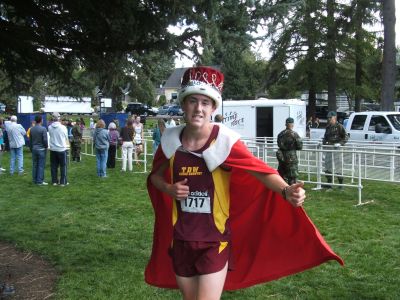 Alex Dillard of the Dalles-Wahtonka has raced well all season including a first at division of the Danner race but on Friday he put in his best effort in a PR time of 16:03.  He ran from the front all the way and the only negative was to come so close to breaking sixteen and miss.   On the other hand it was a good day all around for Alex, who rumor has it had to miss the awards ceremony, so he could race back home, where he would be king of the home-coming dance.

David Steele of Capital made the long trip from Idaho worthwhile with his second place effort of 16:22.  Alek Angeli of Klamath Union took third three seconds later and was followed by Ryan Maag of Nyssa, who ran 16:32.  Reuben Mulhern & Sam Powell secured fifth and sixth for Borah with their times of 16:33 & 16:45.   Capital won the guys’ title by a 43 to 74 margin over Borah.  South Eugene was the top Oregon team with 108 points, which was good for third over Hood River. 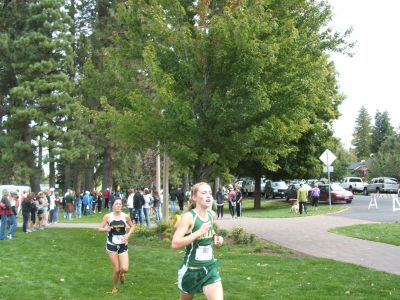