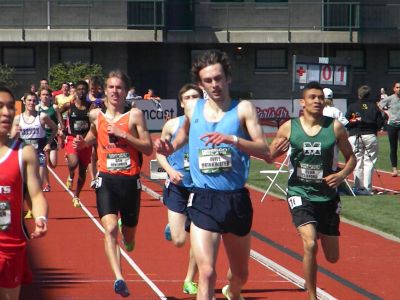 Will Drinkwater of Gig Harbor

The Sun finally visited the track in time to make it more challenging for the distance runners and participating athletes had a chance to establish solid marks in various events.   Tatum Taylor of O’Dea won one of the more anticipated events by claiming the 100 Meter Dash in an impressive 10.65.   The race might have been billed as a duel between Tatum & Thomas Tyner of Aloha but Tyner pulled up early in the race & could not finish.  It should be noted, however, that Taylor appeared to have the initial lead out of the blocks.  Justin Browne of gig harbor ran 10.92 to take second and Shelby Prince of Aloha followed in third with 11.04.   Taylor, who usually represents the Seattle Speed, returned to score in the 200 Meters with 21.66, which easily topped Prince, who ran 22.05.  Byron Powell of Garfield earned third in the event with 22.08. 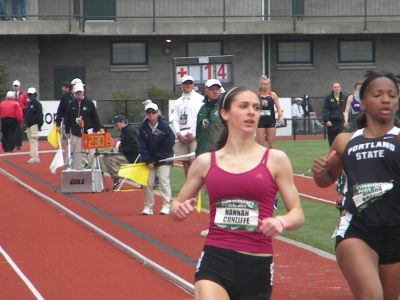 A quick glance of the final results shows that Sabrina Moore of North Carolina ran a fine 11.92 to garner the girls’ 100M, as Dominique Keel of Westview (12.01) & Janelle Anthony of Cajon (12.32) followed in second and third.   Not to be overlooked is the effort of Hannah Cunliffe, running for the Seattle Speed, who placed third against collegiate athletes with a 11.77 clocking.   So impressive was her race that Oregon star English Gardner, the winner in 11.28, came over to congratulate and encourage Hannah.   It was a class act on the part of Gardner, which was equaled by Chancey Summers of the Ducks, who offered a pre-jump to Haley Crouser of Gresham, who competed against collegians in the High Jump.  Crouser, who is relatively new to the event cleared 5-04 and was seen clearly over the bar at 5-06 with her body before catching the bar with her heel.   It bodes well for her future success in that technical event.  Haley would have scored against her peers, as Sara Almen of Santiam Christian won the event with 5-06.  There was four-way tie for second with 5-02 being the magic number.  Chelsey Muskelly of Kent Meridian, Michelle Ellis of Hillsboro, winner of the Aloha Relays, Sarah Taylor of & Lucinda Howard, both from Summit, scored points for their team.   Not to be overlooked, however, is the victory of Summers, who soared 6-00 to annex the collegiate title with a PR. 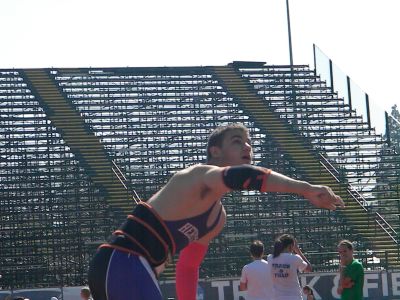 There were a fair number of solid marks in the Field Events with Sean Keller of Heritage leading the way with his victory over Cody Danielson of Newberg 213-11 to 204-09.   Keller is dealing with tendonitis, while Danielson is relatively new to the event but progressing quickly.  Cody earlier had broken 200 at Aloha & now has another PR.   Travis Pickett of Snohomish scored in the Hammer Throw with 177-06 edging Triton Pitassi of Camas, who threw 175-04.   Beau Brousseau of Oregon City led the way in the boys’ Shot Put with 61-01 with Jefferson Jarvis close behind with 60-06.  The Discus saw Phuong Troung of Mt. Tahoma top Jacob Foutz of Sheldon 171-10 to 170-10.    McKenzie Warren of Sandy won the girls’ Hammer with 153-01 and also placed second in the Shot Put behind Alyx Toesina of Kentwood, who went 42-00.   Makena Schroeder of Sandy earned laurels in the Javelin with 136-05.   Kai-Jian Buckley of Liberty won another invitational in the High Jump with a leap of 6-09.50.  It was a hotly contested event with Coe Smith of Hoquiam clearing 6-08.25 & Brad Laubacher of Summit going 6-07.   Jameson Shirley of Skyview soared 14-11 in the Vault to claim that over Dylan Johnson of Jesuit, who cleared 14-07.

Fans of distance racing enjoyed some interesting races including the boys’ 1500 Meter Run.  Christian Gravel of British Columbia came in as the favorite and was always in contention but Ken Freeman of Roseburg led the way through a 64.5 second 400M.   Beaverton’s Dan Oekerman assumed the lead shortly after that and then gave way to Wolfgang Beck of Gig Harbor, who then led through 800 Meters.  Beck, just a sophomore, surrendered the lead to Dean Clifford of Earl Marriot and led at the bell, which was run at three minutes flat.   The final circuit saw the race boiled down to a three-way struggle between Clifford & Christian and Will Drinkwater of Gig Harbor, who moved into contention and soon challenged for the lead.   Clifford was caught by Drinkwater, who in turn was passed by Christian coming off the final turn with the BC runner winning the sprint to the tape in 3:59.47 – the second fastest time in the event ever.   Drinkwater placed second with 4:00.20 and was the first American in the race and Clifford took third in 4:01.  Oekerman finished fourth in 4:01 just ahead of the valiant Beck, who was credited with 4:01.78. 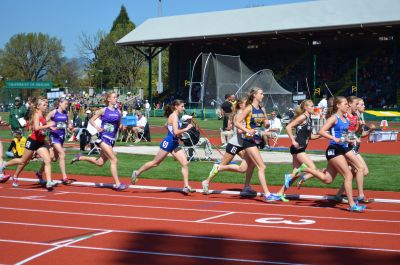 The girls’ version of the race saw Lauren Perry of Richland take the lead as Alexa Efraimson was forced way wide on the first turn as she tried to stay out of trouble.  Megan Fristoe of Summit was tucked comfortably near the front in the middle of the pack.   The first lap went in 78.6 with Katrina Allison of Lord Byng in front.    Sheldon’s Maggie Schmaedick moved into contention as did Paige Rice of St. Mary’s Academy, who won the 3K on Friday.   It was Rice & Efraimson on the lead through 800 Meters, which was reached in 2:33, as Bill McChesney Sr. called out the splits.   Efraimson and Rice soon began to duel, while the race took shape for third as well with Kala Stone & Lauren Perry moving into third and fourth respectively.   The Camas runner began a long surge with 300 Meters to go and during the ensuing lap drew away to win in 4:34.23.   Paige Rice raced home alone in second in 4:37, while Kala Stone edged Lauren Perry for third with both being credited with 4:41.  Paige Kouba of South Eugene closed well to claim fifth in 4:42 and Peggy Noel of South Delta was timed in 4:44.  Erin Clark of South Eugene, Maggie Schmaedick, Rachel Sullivan of Centennial & Megan Fristoe rounded out the top ten.

The girls’ 800 Meter Run evidenced a first 200 Meters in around 32 seconds with Lynelle Decker of Mountain View (Wa.) leading.   Lauren Perry, coming back from her earlier effort, was second, while Jesuit’s Olivia Artaiz held third.   At 400M Perry led the way followed by Artaiz with Decker third and Allison Williams fourth.   Maton sped away down the final straight to win in a solid time of 2:16, while Perry (2:17.48) & Williams (2:17.48) placed second and third in the heat respectively and Sara Tsai secured fourth (2:17.83.)   Silverton’s Morgan Anderson, who has committed to Oregon State, won the earlier heat and had the second-best time of the day with 2:17.14.    For the guys’ the 800 went to another Canadian, this time Nathan Goodwin, who ran 1:56.80.  The irrepressible Will Drinkwater once again was the first American with 1:57.    Jackson Darland of Sheldon came in third with 1:58.43.

The first high school track event on Saturday was Freshman Girls’ 3,000 Meters.  If there was any doubts, that this was a strong class the race eliminated any doubts and this in spite of the fact that the field did not include Alexa Efraimson of Camas, who was running against the upper classmen, and Alexis Fuller of Union in Vancouver and Gracie Todd of Eugene.  Piper McDonald of Summit and Dylan Hite of Jesuit went out for the early but it was Erin Gregoire of Beaverton and McDonald, who led after 400M, which was passed in 80.4.   A large pack followed, which included Megan Condon of Skyview and Sara Tsai of South Eugene.  Condon took over the honors and led the way through 800M in 8:47 but the chase pack remained fairly large with around nine runners including Lindsey Bradley of Richland.   It was Bradley in fact, who covered the next 400 in 87 seconds to set the pace of 4:14 through three laps.  For the next to circuits 87 was the pace of choice but it was McDonald, who showed the way at 1600 Meters in 5:42.   By the time the leaders had completed five laps in 7:06 the pack was down to just four runners but McDonald was still showing the way.   Running with Piper were Tsai, Bradley & Brenna Peloquin of Gig Harbor.  Another twenty meters back Phacelia Cramer of South Eugene & Megan Condon.  During the ensuing lap it was McDonald, who seemed to set the pace, while Peloquin ran a bit removed from the trio and appeared to be struggling to hang-on.   Tsai went into over-drive on the back stretch and began to pull away from Bradley, while Peloquin and McDonald fell off the pace about ten meters back.   Tsai drove inexorably towards the finish and won going away with a time of 10:20.17, which would have given her third in Friday’s race among her elders.   Bradley rounded the turn and headed into the stretch seemingly with second locked up but Brenna picked up ground on the final curve and then swept by Bradley in the home-stretch to claim second in 10:21. It was some kick but Bradley was right behind with 10:21.99.   Piper McDonald finished alone in fourth with 10:26 and Phacelia Condon earned fifth in 10:35.  Erin Gregoire & Dylan Hite both were credited with 10:40 and change, while Alissa Pudlitzke of Camas ran 10:41.  Olivia Powell of Creswell edged Megan Condon for ninth with both sharing 10:46.

The Freshman Boys’ saw Isaac Wadhwani of BC lead the pack through splits of 78.2 and 2:35.   He was followed early by Matthew Maton of Summit, who ran on the outside, plus Matt Campbell of Siuslaw & Reilly Bloomer of South Eugene.   By the time the leaders reached three laps in 3:53Kaden Harbertson of Skyview had closed in with the leaders.   Maton held the pace at 5:09 then relinquished the lead to Tristan Peloquin of Gig Harbor, who had honors at 6:20.   With two laps to go only the trio of Maton, Peloquin and Bloomer were left to vie for the title, as everyone else had faded behind including Campbell, who was the last to fall behind the leaders.    It was Maton, who pressed the issue during the final lap and a half, ad Bloomer finally gave way after they reached 2400 Meters in 7:32 but Maton kept up the pressure by increasing his cadence and in the end blazed down the stretch to win in 9:09.85.   Tristan followed in second just two seconds later and Bloomer claimed third in 9:18 – all three leaders registered marks, which placed them in the top ten of the race’s all-time list.  Matt Campbell raced home by himself in 9:25 and Harbertson claimed fifth in 9:36.   Wadwani held on for sixth in 9:39 and Michael Hammer of Gig Harbor took seventh with 9:40.    Gunnar Vik of Central Catholic, Taryk Boyd of Camas, Sam Lomax, also from CC, and Jackson Cutler of Camas completed the top eleven finishers. 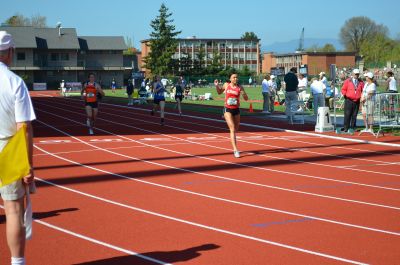 Mackenzie Mathews of Jesuit ran 14.75 to score in the short hurdles, as Rochelle Peppel of Churchill & Sarah Toesina of Kentwood earned 2nd & 3rd.   Peppel doubled in the 300 Hurdles and scored in that event with 45.51.  The race would have been even more hotly contested had Haley Crouser, who sped down the track in 14.89, had not faced a collegiate field.   McMinnville’s Ashante Horsley ran 57.98 to handily win the 400 Meters, while Byron Howell claimed the guys’ version.   In the boys’ hurdles event Abu Kamara of Kent Meridian ran 14.68 to win the 100H, while Mike Wilson of Summit topped the 300H with 39.55.  He had a good battle with Tyler Robde of Cugiak, Alaska (39.67) and Sean McGettrick of Gig Harbor (39.70).  Justin Browne of Gig Harbor topped Austin Baird of Marist in the Long Jump 23-08 to 22-07 but they reverse order in the Triple Jump (43-09 to 44-08.s5.  Justin Emerald of Springfield beat them both, when he leaped 45-03. 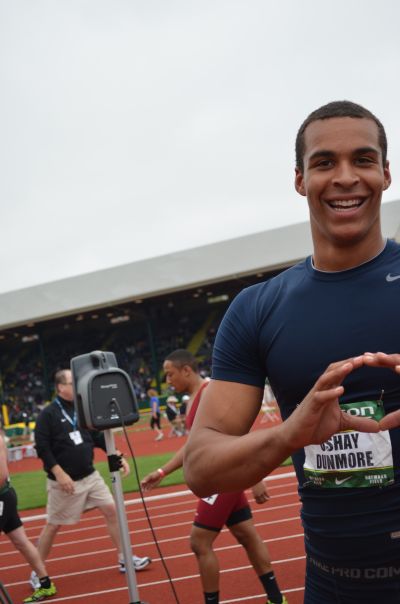