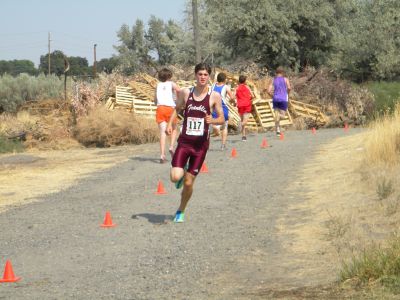 The Brooks/Runner’s Soul Invitational has hosted a number of notable runners & races in its relatively short history but Saturday’s edition offered something special.   The varsity boys’ race offered a number of important early match-ups and there was a palpable feeling of anticipation in the air, for the race would offer important clues as to how the season might unfold at least in the 5A division.   In choosing to compete in the meet for the first time the Franklin harriers made the team race alone something of great interest, for they had finished first and second in the 2010 5A State meet.   Although both teams suffered losses due to graduation, including Ian Burgess of Franklin, who won the individual title, both teams returned a solid nucleus from the previous year.   Certainly on paper they appeared to be two of the top teams in the division, if not the state.    Their contest would provide a clue to where they stood early in the season.

Both teams had an individual element of note, especially after Jackson Baker of Franklin annexed the Wilsonville Invitational in record time.   Jackson had placed seventh in the State in 2010.  Javier Velasco had placed fifth at State individually last year and had been looking strong in practice, yet on race day fans commented that there was at least a three way battle in practice to see, who was number one just on the team.   Alejandro Cisneros had been ill at state last year & had a poor day, so he probably had something to prove as well.

With the start of the race there was a bit of a surprise, when Alex Dillard of the Dalles-Wahtonka took an early lead and held to around the half mile mark.   His lead was about ten meters over a pack that included the entire first five of Hermiston:  Eduardo Juarez, Alejandro Cisneros, Jose Macias, Javier Velasco & Keyana Garcia.   Baker was tucked just behind the quintet and followed by his team mate Fletcher Hazlehurst plus Seth Deal of Waitsburg-Prescott.    The leaders soon moved out of sight as they headed around the baseball diamond in the distance but already the anticipated team battle was finished.

With Baker tucked amidst a phalanx of Hermiston runners the scene was somewhat reminiscent of the Kenyans in international XC & one parent commented that the hope was that the Hermiston runners did not race like their counterparts.    The leaders reached the mile mark in 5:04, as they paid their respects to the weather conditions, which saw temperatures in the nineties.

By the time the leaders returned to view & were back on the main part of the course the Hermiston pack had been reduced to three runners, who were shadowed by the Franklin star.   Baker felt the conditions did not warrant him blazing out in front & he was content to wage a war of attrition with his rivals:  Macias, Juarez & Cisneros.   Velasco ran alone in fourth & was trailed by Deal.   They quickly began another circuit of the Sandstone Middle School field and by the time that the leaders began to head for the baseball diamond around the 13:30 mark Baker only had two Hermiston runners to contend with as Cisneros fell off the pace.

Jackson moved into the lead, while the trio was out of sight and applied pressure to his challengers and by the time he had returned to view he had assured himself of victory.   Now the only question was his winning time & whether it could challenge the course record established by Juarez in 2010 of 15:47.   He finished alone and feeling no need to really tempt fate & the weather, he eased off of the throttle to finish in a very solid 15:57, which is the third best time ever run on the course (three time Idaho State champion Eric Fitzpatrick ran 15:50 in 2009).

Jose Macias & Eduardo Juarez may be team mates but they waged a spirited duel down the final stretch and Macias, whose older sister Jennifer won the girls’ race in 2006 & was on hand to watch, edged his team mate at the line.   Both were credited with 16:11 & it was an impressive run by the sophomore, who had appeared to be struggling a bit early in the race.   There would remain no illusions of a team battle, because Cisneros placed fourth in 16:18 & Velasco followed in fifth (16:24).    Seth Deal took sixth in 16:29 while Fletcher Hazlehurst earned seventh in a very credible 16:47 given the conditions.   Nathan Meeker of Oregon City garnered eighth by edging Joseph Schuldheisz of Kennewick, who ran 16:54.      Hayden Wise of Moses Lake rounded out the top ten with a 16:58 clocking & Alex Dillard placed eleventh with 17:07.   Keyana Garcia completed the Hermiston scoring total by taking twelfth in 17:13. 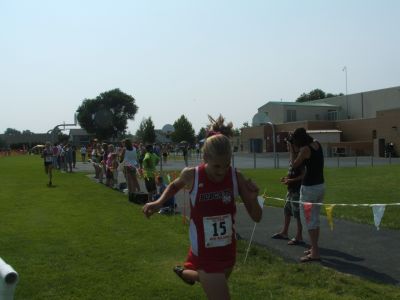 The girls’ race offered a duel between Katriel O’ Reilly of Union & Katie Markwick of Hermiston.   Both sophomore runners had strong campaigns last fall with O’ Reilly taking second in Oregon 3A after placing 13th at Firman, while Markwick had claimed fourth at State in 5A.    Markwick also had placed third in this event last year behind course record-holder Erin Hegarty of Hanford & Grace Viuhkola of Hood River but O ‘Reilly moved into the lead early.   She noted later that it had not been her intention to grab the lead, but once there she intended to stay there.

Markwick ran a bit conservatively, which made sense given the heat, and was alone in second throughout the race.   Hannah Marsh of Moses Lake trailed Markwick but was back in third, while Franklin’s Margarita Lauer trailed her by another  thirty or so yards.  Hannah Marsh of Moses Lake held fourth early.   As the race developed O’Reilly continued to lead but Markwick began to inch closer, while Lauer was joined by her team mate Mona Law & they worked together to cut into Marsh’s hold on third.

The heat continued to beat down on the runners and began taking its toll on the leader, who was beginning to show signs of strain as she headed out of sight and towards the baseball diamond for the second time.  Rachel Crawford of Oregon City, who ran well in this race last year, was also bothered by the heat and she fell back into the pack after being hiring in placement earlier.

Once returning into view O’ Reilly still remained up front but her thirteen second lead had been whittled to around eight seconds & Markwick was moving well along the perimeter of the course, as they headed for home.   By the time that Katriel & Katie made the final turn to head to the chute the lead was visibly smaller but the question was whether there was enough time.   Although straining a bit O’ Reilly gamely held on and crossed the line in 20:41 to claim a hard-earned victory.  Katie Markwick followed only three seconds behind the winner to improve upon last year’s third place finish, while Margarita Lauer made a big move of her own to finish alone in third with 21:04.   Hannah Marsh ran a game race to take fourth (21:22) ahead of Mona Law by two seconds and Josie Lanai of McLoughlin earned sixth.   Union runners Stormy Bullard & McKenzie Evans placed 7th & 8th and Fiona Wylde of Hood River came in ninth.  Maddie Wood of The Dalles finished in tenth & Julia Sheremet of Moses Lake was eleventh.

There is a long way to go in this season with plenty of time to both improve or fade but by the time that the dust had settled and the Hermiston Bull Dogs had made a statement.   They are a force to be reckoned with not just at the 5A level but in the state.   If Coach Jake Puzey gets his fifth runner closer to the first four Hermiston could be a regional power.   Franklin, of course, should continue to grow stronger and this is but a step on the road to Eugene.   The final boys’ team score saw Hermiston defeat Franklin by a margin of 26 to 59 and Hermiston won round one.   Tiny Union won the young ladies’ title topping the host team 72 to 100.

It should be noted that meet officials were well prepared for the anticipated heat and the athletes were all handed bottles of water after entering the finish chute.    Tastier relief was provided by local farmers, who donated water melons to the cause and there were many, who availed themselves to the cuisine.   Thanks also to Brooks & Runners Soul, who again sponsored the meet plus New Balance, which displayed their commitment to running, as well as US workers and the environment.   The company had a new fuel-efficient hybrid car, which was made by Ford, which hires American workers.  It was a fitting touch on a challenging day, when all runners needed to evaluate their own fuel efficiency. 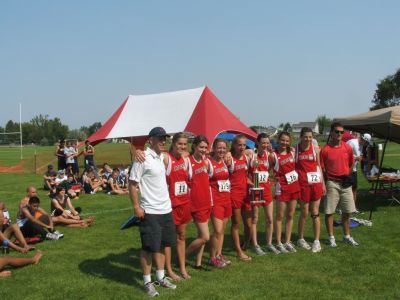