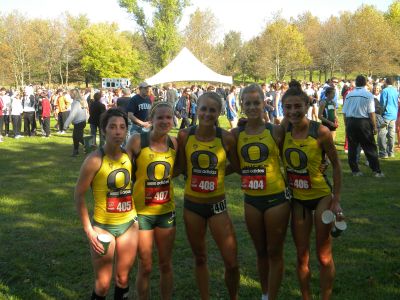 The women’s individual race was similar to that of the men’s race, because two leaders broke away from the pack and engaged in their own private struggle.   Aliphine-Tuliamuk-Bolton of Wichita State and Risper Kimaiyo of UTEP had already built a sizable lead, when they reached the mile mark in 5:15.   Further back loped Oregon transfer Alexi Pappas and Duck stalwart Jordan Hasay, who appeared content to concentrate on the team race.   Another ten meters behind that duo trailed a fair-sized pack, which also seemed content to contest for positions later in the race.

The leaders went through the 3K in 9:43 and remained seemingly on equal terms, while Pappas and Hasay continued to hold their positions ahead of the chase pack.  The duo’s 5K time was given as 16:38 with the Wichita runner holding a slight lead.   The race took shape late and with 700 meters to go Aliphine had established a ten meter lead, which she would hold the rest of the way.   Her final clocking of 19:43 was not far off the course record of 19:40.  Kimaiyo retained second by following in 19:46 and Alexi Pappas held her own by holding her distance back through the stretch to finish in 20:00.  Violah Lagat of FSU closed well to grab fourth in 20:00, while Jordan Hasay garnered fifth in 20:03. 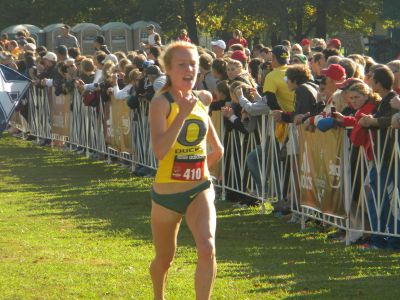 Colleen Quigley was the third FSU runner to finish and was time in 20:06 & in so-doing edged Emily Lipari of Villanova sixth but shared the time.   Cally Macumber of Kentucky earned eighth in 20:09 and Sara Sutherland of Texas (20:10) & Jillian Smith of Michigan (20:13) rounded out the top ten.  Eleventh went to Katie Clark of Butler in 20:14.

Florida State sewed up the team title, when Kaleigh Tyerman became their fifth finish in 20:22.   The former Crater prep placed 17th just ahead of Allie Woodward of Oregon, whose time of 20:24 made her the third Duck finisher.   Not far behind them was former Jesuit star Annamarie Maag, who placed 22nd for Georgetown with 20:32.   Annie LeBlanc, a freshman, finished 27th for Oregon in 20:41 and Sarah Penney was the fifth Oregon finisher with her time of 20:48, which saw her come home 34th.   The team score by that time had been locked up with Florida State winning with a low of 72 points to Oregon’s 87.  Michigan was a distant third with over 140 points.

The other Oregon finishers were Megan Patrignelli, who placed 42nd in 20:57 & Abbey Leonardi, who earned 52nd with her mark of 21:05.   Placing 122nd was another old friend, as former Milwaukie star Erin McLaughlin took 122nd for Boise State in 21:45. 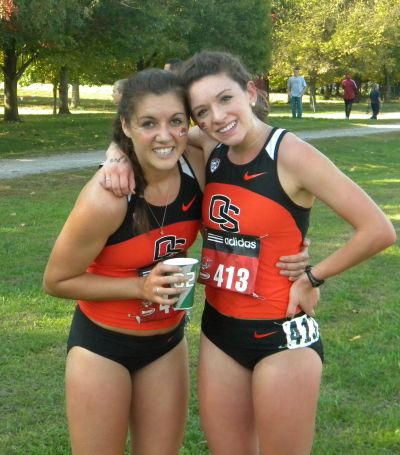 Oregon State ‘s Kelly Sullivan has a fairly young team especially with Erin Jones moving to the Triathlon professionally and Olivia Poblacion earning a scholarship to study in Morocco but they proved they are a team, which will improve with experience and in Louisville they placed 25th as a team.   Kinsey Gomez led the team placing 123rd in 21:46 and former Clackamas Community College trickster Teresa Lawson followed in 125th with 21:48.   Sandra Martinez, the veteran as a junior from Yakima, earned third on the team placing 14oth with 21:53.  Former Summit freshman Kira Kelly followed in 149th (21:57) and Kelsi Schaer, who once ran for Tualatin, finished 159th in 22:02.   West Linn Lion contribution Taylor Nowlin garnered 195th (22:30) and Sabrah DeVoir, who ran for Jesuit, followed in 219th in 22:51 for 6K. 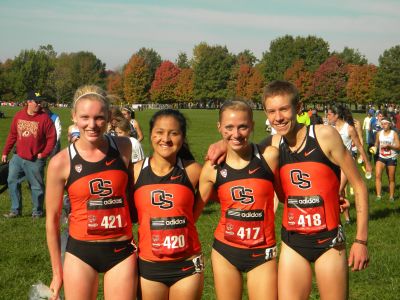 With an eye on the future Sullivan also ran three freshman runners in the Open race.   Longtime Crusader scorer Adrienne Demaree placed 97th with a time of 22:52.  Former Silverton runner Morgan Anderson followed in 141st with a time of 23:23.  Haley Hunt was clocked in 23:38 and placed 185th.   We look to see the Beavers compete at nationals down the road, as more harriers take advantage of the new track on the Corvallis campus. 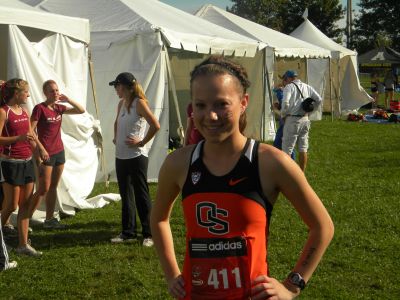