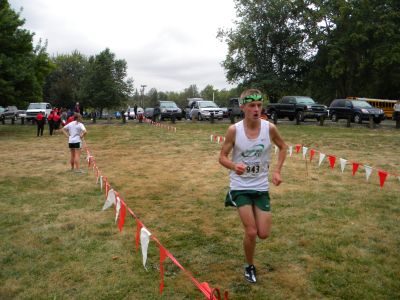 Cool temperatures and mostly cloudy skies presented runners enviable conditions to go with a fast course and many runners took advantage of the situation on Saturday in Albany’s Bryant Park.   Numerous harriers ran times near or even better than their personal bests but no group seemed to reap the benefits of the situation quite like the gang from Summit, which put on a dominating display of running prowess.

Last summer we had commented that the Summit girls looked quite strong on paper and at Bryant Park they left little doubt, as their top five soared over the course and took almost sole possession of the top seven.    The race began with Morgan Anderson of Silverton, who had won the Silver Falls Invitational earlier this season, leading the way early in the race.  Close behind her was Piper McDonald, who is a Summit freshman.   Megan Fristoe & Ashley Maton of Summit gave chase along with Shannon Susbauer of Milwaukie.   They lead the field out of sight and into the trees and, when they returned to view, they ran near the Willamette River, which provided a scenic backdrop.   The leaders reached the mile mark in a little under 5:30 and at that point it was Fristoe & Maton leading the way with Susbauer looming right behind them.   McDonald had fallen off the pace and was now alone, as was Morgan Anderson, who was a good five meters back.

They raced to the far side of the course and back out of sight, where Megan Fristoe broke the race open.   She reached the two mile mark in 11:20 and seemed to be picking up the pace in spite of the fact that she had a cold.   Certainly the way she was running would not incline her competitors to believe that story and by the time she returned to the area by the river the only question was how fast she would run.   With only 800 meters to go Megan pressed on to earn victory in a PR of 17:53.  It was an impressive race, especially when one considers her season had been hampered by a knee issue.   Still she went into the race with the avowed goal of breaking eighteen minutes and now she is a member of a select club in the nation.

Ashley Maton, who had set her PR two weeks ago at the New Balance meet, placed second and in so doing bettered her personal best by two seconds.   Shannon Susbauer, who won her District Preview meet earlier this fall, ran a fine race to claim third and, like Fristoe & Maton, established a new personal best of 18:16.    Piper McDonald ran 18:35 to chip in a fourth place effort for Summit, while Morgan Anderson placed fifth in 18:39.   If they gave an award for the most people passed in the course of the race, it most assuredly would go to Sara Fristoe, who went out conservatively and was not even in the top twenty early in the race.  Sara threaded her way through the pack and, when the race was over, Sara contributed a fine sixth place effort in a time of 18:42.   Kira Kelly of Summit followed in seventh with an 18:47 clocking to complete the Storm scoring.  Summit left no doubt about the victory as they had a low of 20 points to the 101 of Prairie.  The Bend girls placed third in the team scoring with 148 points to top Corvallis, which had 156.   If you compare what the Summit  girls ran with what Glacier Peak runners did today at the three mile Sunfair course, you will note a favorable quality to their top five.

Brigid Behrens of Corvallis finished 8th in 19:00 and Jenna Mattox of Bend earned ninth with 19:01.   Aiyanna Cameron-Lewis of Crescent Valley took tenth in 19:06 and Tess Nelson of Summit secured 11th and more icing on the Storm cake with her time of 19:08.  Nicole Goecke of Prairie placed 12th in 19:16 and was the first Washington finisher.

Olivia Moehl of Summit led the way in the girls’ junior/senior race with her mark of 20:24 as her team mates Hadley Schoderbek & Hailey Hewiston secured second and third.  Lauren Lyknis of Hillsboro triumphed in the freshman/sophomore race with 20:49.  There was also a middle school race, which was combined with open runners but Brooke Chuhiantseff of Walker led the way with a 3K time of 12:24.

Travis Neuman of Summit had placed second two weeks ago in the New Balance Invitation with a fine 15:30, yet did not really feel quite right in that race.   Travis had to have left the course quite pleased after turning in a blistering time of 15:06.   The race started, however, with Mark Tedder of Battleground taking the early lead.  Nolan Sekermestrovich of Corvallis, Theo Puentes of Newport & Juve Guzman of Woodburn ran in 2nd,  3rd  & 4th early.

The leaders reached the mile mark in a little under five minutes and by that that time the race’s complexion had changed.  Leading the way at that point were Travis Neuman & his Summit compatriot Eric Aldrett.   Jackson Baker of Franklin ran behind just off their shoulders.  The trio had separated themselves from the chase pack, that included Justin Rocereto of Southridge, Nick Obletz of Oregon Episcopal,  Alek Angeli of Klamath Union and Guzman.  Zach Holloway of Central Linn, the Silver Falls Invitational winner, and Nathal Love of Tualatin ran close behind them.

After leaving the trail by the river Neuman moved into the lead and Jackson attempted to stay with him, as Aldrett slowly gave up ground but Neuman looked very fluid as he seemingly flowed over the course en route to his time of 15:06, which ought to merit national attention. His time was well better than the 2009 record of 15:22 set by Kyle Boe of Columbia River.  Jackson Baker is one of the finest male runners in the state with victories at Wilsonville, Hermiston & Hood River but he could not respond to the surge of Neuman on this day.  Still his time of 15:24 was impressive and on most days it would earn a triumph.   Eric Aldrett finished alone in third with a solid 15:39.  Justin Rocereto, winner of the Chapman Invitational, led a small parade with his fourth place time of 15:53.    South Salem Invite winner Nick Obletz took fifth in 15:55 edging Alek Angeli, who was credited with the same time.

Juve Guzman secured 7th in 15:58 and Zack Holloway earned 8th in sixteen flat.   Nathan Love followed in 9th and Theo Puentes rounded out the top ten.  Fletcher Hazlehurst of Franklin took 11th with Luke Hinz of Summit at his side & given the same time.  Zach Roth of West Albany earned 13th and Mark Tedder, winner of the Run-A-Ree followed in 14th.    The Summit guys won the team race with a low of 55 points to best Franklin’s 153.   Crescent Valley placed third with 252 and Southridge had 273.

In other races Gavin Bomber of Linus Pauling won the Middle School3K with 12:20.   Alan Nielsen of Summit claimed the junior/senior race with a time of 17:30, while  Maclean Panshin of Corvallis scored in the freshman/sophomore race defeating  Jon Condrea of Crescent Valley 17:39 to 17:55.    Race officials should be credited with an error free day with races that went off on schedule.  Mizuma sponsored the event and supplied numerous gift prizes, which included shoes and bags.   The awards were determined by lot, which made it far safer than the usual method of tossing things into a crowd. 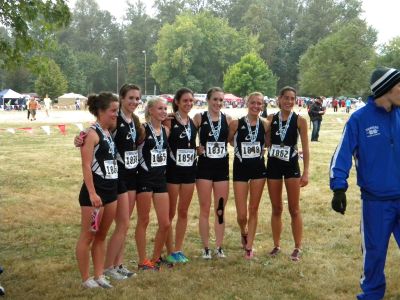